Not too many fixed gear ATB rigs hitting the FixedGearGallery these days. It's really hit or miss over there. I used to try and guess Which post is a mountain bike but in the case of manufacturers that are no longer producing ATB/MTB frames anymore, e.g. Bridgestone, I might miss something. So, now probably like everyone else, I just click on the next set of bikes to appear when Dennis updates the page.

Speaking of frames no longer produced, there is a cool Bridgestone but labeled as a Diamonback. Marcello is using it as a winter commuter but plans to sell it and get another Bridgestone to build up. It's funny, when I did my original scouring of the FGG looking for ATBs I basically looked at all the known manufacturers that I knew that made mountain bikes, like Trek, Kona, Surly, etc... For some reason, I missed this one. I just love Konas. 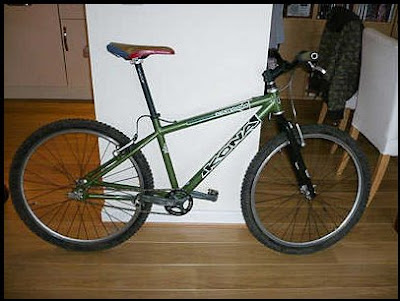 This is Tim Heyes first fixie and I only came across it by looking at his second submission and he mentioned,

Here is the submission of my second fixie to the site. This time it's a slightly more sensible road going one as opposed to a mountain bike...

Unfortunately there was no link to the previous bike so I emailed Tim to find out where it was located and got his impression of riding off road fixed as well and he said,

Definitely fun – although my fellow riders didn’t think so as they casually freewheeled over jumps and berms and I’m left spinning wildy some distance behind! I’m not ruling it out though – I just need to get used to having a back brake and actually find someone stupid enough to do it with me…

Glad to hear that he is not giving it up which reminds me that I haven't tried my fixie on anything be fire roads and rail trails and it might be high time I give it a shot on some real single track...

Not sure if I mentioned this site before but 63xc.com The Offroad Fixed Gear Site. The site author of the site said after 5 years and 20 issues it was time to move on to something else. Still the site is up and there is quite a bit of good reading there if want to know more about riding fixed gear off road.
at 6:27 AM

Speaking of Fixed MTB riding. I gave up on my Kona as a Fixed ride. It was just too much work in the woods and I was not enjoying it too much. My Kona Unit is now SS with 26 and 69 configs with a quick swap of the front wheel.
I am mixed on which feels better although in technical terrain the 26 is easier. www.1cog.net

That's too bad. I am planning on a fixed MTB ride next week at Huntington.