I rejoice that there are owls ...

I rejoice that there are owls. Let them do the idiotic and maniacal hooting for men. It is a sound admirably suited to swamps and twilight woods which no day illustrates, suggesting a vast and underdeveloped nature which men have not recognized. They represent the stark twilight and unsatisfied thoughts which all [men] have.

Why am I quoting Thoreau and owls? On the way back and hiking my bike up a pretty steep slope, a rather large, brown mottled bird swooped down in front of me and alighted in a tree pretty close to the trail At first I thought it was a redtailed hawk but then I saw those big eyes staring at me and knew it was an Owl. 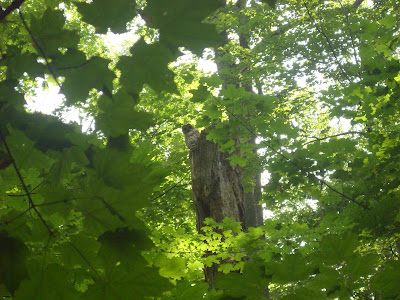 Here is a close up of the owl. You are looking at his back and his head is basically turned 180 degrees back towards me. 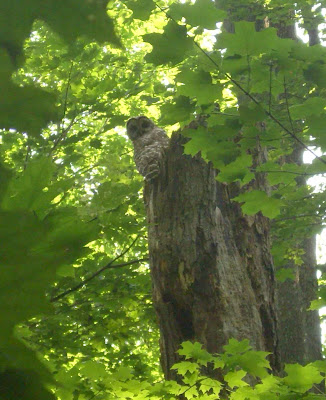 Tried to enhance this shot. I took the picture with an ISO rating of 1600 and it turned out a little grainy. I figured if I converted it black and white, it might look better. 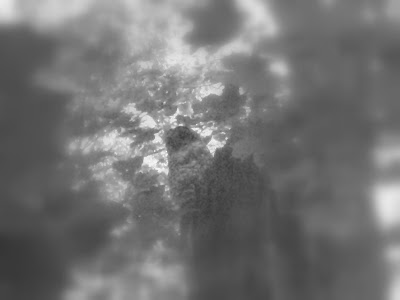 Rode the Qball this morning because I was a little uncertain on how the 'Horse would perform after I spent the better part of two hours yesterday trying to adjust the rear derailleur. I think I was successful - the lowest most gear now works again but since I was planning on at least a 10 mile ride I didn't want to be way out on the trail and all of sudden have a problem. 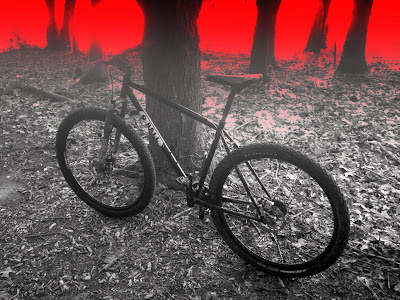 I had barely began climbing the Brody road when I met someone coming down. His name is Roger and he lives in Newtown. He told me that that he rides the Upper Gussy Trail! 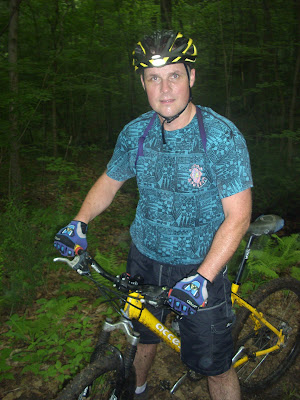 In fact he told me the loop that he rides the Mulikin Trail, only he climbs up it rather than enjoy the fun down hill. Don't get me wrong, I like to climb that but there are sections of that trail that are not fun if you are heading up hill. Still, I probably should give it a try - I don't think I have ridden that section in the other direction. After he rides the Gussy Trail, he turns back north on the West Side Equestrienne Trail. I haven't been down that trail in three years. He mentioned that there was huge tree down in the middle of the trail. Based on what he told me, here is my guess on the loop that he is riding. It's probably around a 5 mile ride. 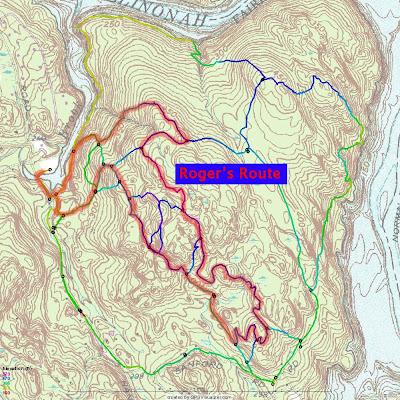 On the switchback climb after Via Roma I noticed all these spiderwebs on the ground, covered in dew and with the rising sun they really stood out this morning. 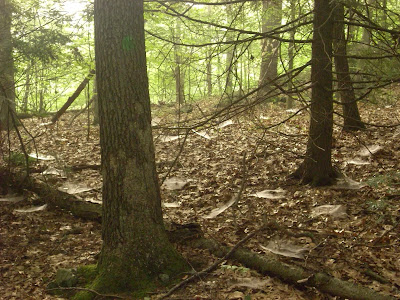 Today's ride consisted of up the Brody Road to the Gussy. Down the Gussy and out onto Sanford Road, then Echo Valley. Up onto to the old rail road bed and down (approx 2 miles) to Walnut Tree Hill. Loop back and pick up Al's Trail just before the intersection with Albert's Hill Road. Rode back on Al's trail. Decided to come back via Al's Trail as it goes back into the forest and look for the old road that comes off the Brody Road. I found it, but there were some grueling hike-a-bikes along the way. 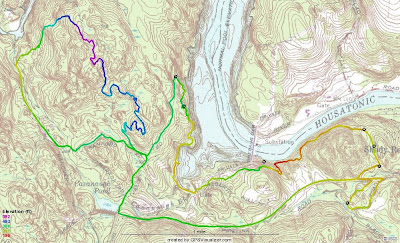