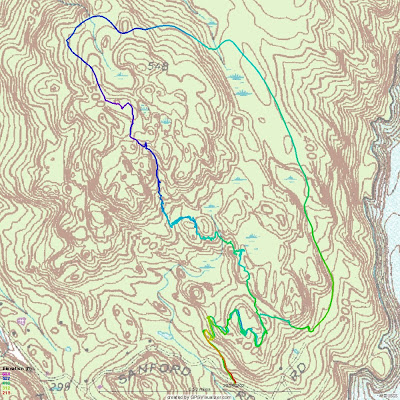 I was going to hit the trail right at 2pm today but waited for a friend to join me. It was actually good, because it gave me time to get ready rather than rush out the door. The Acids came in Friday so I switched pedals and they felt great. Tren showed up at 2:30 and we started off. Decided to put the Edge in media pouch of my Camel to see how it performed and as you can see by the track above, it performed extremely well.

Hit the Jeep Road off of Sanford and started to climb. Sure is different climbing on a fully than it is on a hardtail, not to mention all the choice of gears. Hitting the new was nice. It really drains well although once the leaves come off it's going to be an awesome trail. The leaves still make it pretty slippery. We by passed for the first roller and had another nice climb to the stonewall, in which I cleaned but it was Tren's first time and he didn't.

We cleared up a section on the new routing portion, about 50 yards before the blue trail and then sessioned at the blue trail intersection (middle red dot in the detail map below). I wish I brought the video camera or my digital because that roller is nice! Some nice little drops in that section, too. Went up through the tunnel of love, which I stalled out on but Tren cleaned and then up the ROW to the new section. Wow, really different when the snow is gone. May have to rethink the crossing point because it's much wetter than it seemed when I first laid the track. The surrounding area has some narrower crossing sites, so I just have to go back and spend a little time figuring it out. 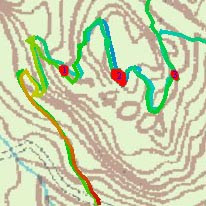 Tren made a great suggestion on the section of the trail that goes near the big vernal pool, that could have been a pond but over the years has undergone eutrophication. The enhancement creates an overlook of the vast vernal pool, so that in the spring time you can hear the musical chorus of the peeper frogs. We also widened out the switch back some that the turns are not a s drastic. 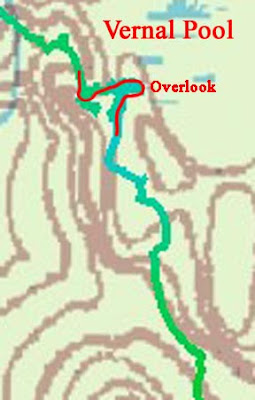 I think the crossing of the two streams before the Switchback needs to be readdressed because riding through there is not easy and rather than crossing two streams it might be easier to just make one crossing after they meet (shown roughly in Orange below). After the Switchback, the route picks up the ROW again. Looking at it closer it seems the ROW branches in hear. The part I pick up is like a secondary road and main road heads further down slope. The trail veers off the ROW and heads uphill, crosses over the ROW and heads down to the last stream crossing. I did a little more marking but then stopped so we could finish the ride. We stayed pretty true to the trail route, only by passed one section in the interest of the ride. 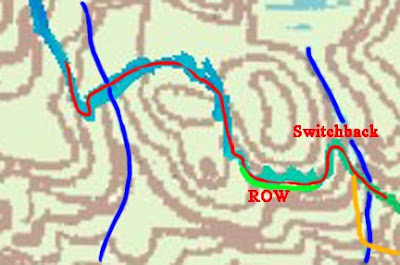 When we got to the last section of the trail that is blocked by an enormous downed pine tree, I heard what sounded like an ATV very close by, so I tore off down the trail to the fire road only to have missed the bastard by a minute or two. Man, do I want to meet up with him and let him know that I don't appreciate him riding in the forest. Frank, whom I have ridden with in Upper Pauggussett emailed me this morning about this same kid and he thinks the kid lives at the top of the hill on Bramble Trail. In the mean time, I am going to see if Tom has any friends at the highway dept to see if someone can drop off some boulders to make it harder for the kid to get into Forest.

Tren and I set off down the Brody Road. It was sloppy to say the least. Once at the Echo Valley parking lot we climbed back over the hump to the ROW, cleaned the Tunnel of Love and then hammered back to Sanford Road. 6.58 miles in 2 hours and 14 minutes. I was pretty muddy but unfortunately the photo quality of my Fuji stinks at night. Should have had the Cannon. 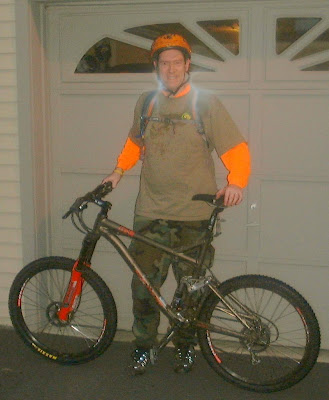 The 'Horse got a work out! However, something is not quite right on the shifting. In the lower and upper gears, it holds the gear fine, but in the middle cogs it shifts itself. I think the shift cable must be loose. I need to get a fourth hand tool and tighten it up. 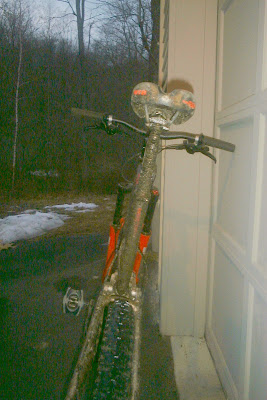 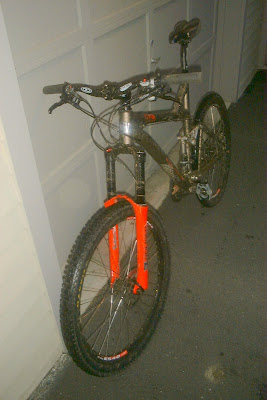 How did the Acids work out? Awesome, however, as you can sort of make out below, the plastic covering on the surface broke off somewhere along trail. I am sure I will find it next time I am out but now I am wondering if I should have gotten the platforms afterall. Sent a note with a picture to Crank Brothers to see if they will send me a replacement part. Otherwise, I might just fill it in with some sort of epoxy or the glue stick from my glue gun. 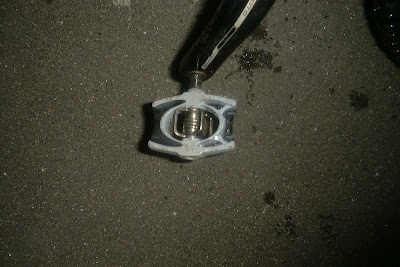