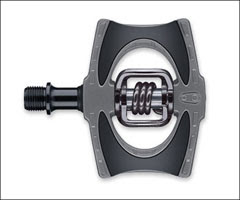 For the longest time I have been jonesin for a pair of CB Mallets but then I read about this new line of pedal from Crank Brothers called the Acid. A little more platform than the Candies (which I have on the Qball and 'Horse) but not as much as what you will find on the Mallets. So, I pulled the trigger on a pair from Blue Sky Cycling, which by the way has the best deal that I could find on them. Of course I solicited some user opinions from the folks over at Bikerag.com and they were all raves.

After getting the Cannondale, which I affectionately now call Barney the Purple Cannondale, and thinking about making this bike into a fixie got me reading all sorts of different websites dedicated to the fixed gear subculture, and what a culture it is. Initially I found this blog that was linked to mine, called IBike, ran by a guy who lives in Wilton named Pete. Ironically, he was selling a Kona Unit on CList that I was interested in but was unsure about the frame size. He decided to keep it and is now working on a fixed project with it. In fact, at my suggestion, he is now contemplating a 69er! Kool-aid drinkers unite! Thought I would extend the favor and link to him. Now we pass comments back and fourth and going to try to ride together at some point in the near warmer/non-snowy future.

Among the popular websites that I have been reading are BikeSnobNYC. This guy's blog seems to be trying to define the fixie culture and put it in the perspective of a non-messenger, fixie bike riding New Yorker. I think by saying New Yorker, that says it all. Nothing more opinionated than a New Yorker (from NYC - other parts of the state don't count), in my opinion. And it now seems that the fixie culture is close to damnation because now that the hiphop set is getting into it. Ironically, he even said that Mountain Bikers are not safe. Then there is the Fixed Gear Gallery, which is more bike porn than anything else, but they have great articles too! Hmmmm, wasn't that the excuse most guys used to tell their Girlfriends/wives why they liked reading Playboy or Penthouse?

This infatuation has led me to figure out how I can get into the game. For me, it's either buy a whole new wheel with a flip flop hub, still looking for that bargain, or see if there is something else and I found just the thing! This article on Fixed Gear Gallery got me going, Riding Fixed Off-Road. by Jesse Ratzkin - How he did it. Started looking for a Boone Ti Cog that would mount where my disc rotor goes and come to find out that you cannot get a Boone Ti Cog anymore. The guy that was making them no longer works for Boone (at least that is what Bruce Boone told me in a note) and he has a year's backlog of orders. Found one on eBay but obviously I am just a Johnny-come-lately to the Boone demand and they are now selling at a 60% premium over their original sales price. They go for $2.50 a tooth. I guess if you want lightweight and still be durable, then titanium is the material to have. Just look at the Moots! 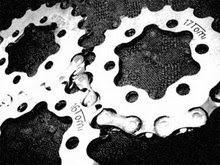 Next on the list is a 20t TomiCog. TomiCogs are laser cut, Type 304 stainless steel 1/2" pitch chain drive bicycle cogs. They are cut to match a standard 6-bolt mtn bike disc rotor mount. Laser etched tooth count and logo, ground tooth bevel. Not intended for use with 9-speed chains, spend 15 bucks and get yourself a SRAM PC-58. Available in 16t, 17t, 18t, 19t & 20tooth. They go for $30 a cog. Same price for Endless Bikes Kick-Ass-Cogs, of which I have two. Got to thank my friend MMcG for finding me TomiCog. This guy has a line on everything! He has supplied me in the past with some great stuff at great prices both of his own stock and through his connections. If you need something, contact Mark and tell him Mark sent you!

So you might be asking yourself what am I going to do with a cog that will bolt into my disc rotor mount on the wheel hub and the answer is, I am building a fixie! Well, sort of at least. Now that my All Mountain needs are full filled with the 'Horse and I have my Qball for more simple riding pleasures, there is no point having another single speed in the stable unless it's doing something different. Barney is different in that he doesn't go off road. I do say that I really loved have that 130mm Splice upfront and I might got back to that eventually, but my goal now, especially since I finally have a Surly 1x1 fork with a long enough steering tube, that I am going back to the 69er concept. Rigid and single speed, and now a flip flop wheel so I can sample even more masochistic single speeding pleasures riding fixed gear off road!

Here is the Surly fork. I am really digging the black and white concept. You will see more of that soon.

To soften the harshness of the aluminum frame, I am going to get a suspension seatpost. Something svelte and low key. Going to go back to the mullet concept, canti brake in the back and disc up front and I am going to play around with different tire combinations. Here the fixation as a 69er and mullet.

As for bars, I am going to give the FUBars another shot with FUGly stem but I think drop bars/riser bars are the best for off road riding.

Hope to have the non-fixed gear single speed version of this up and running this weekend though I won't be riding it until I get my pedals for the 'Horse so that I can put those on the Fetish.