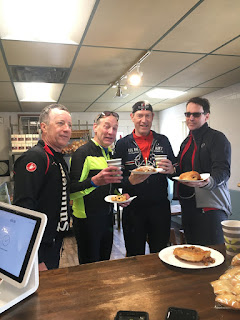 The other day I was looking at the Southbury GIS map when I noticed that there was an old ROW that existing between Poverty Hollow and Cass Rd, so that was added to the route. I had also gotten some intel that West Mountain Road went through, although the post that I read had said that it was a really tough descent even on a mountain bike. I decide to add some roads that I had overlooked on a recent ride with Gavin and some new stuff in Bethlehem. Another objective for this ride was to test out the new fenders I installed on the Sex Machine, as well as the new Garmin Edge 530 I recently purchased. 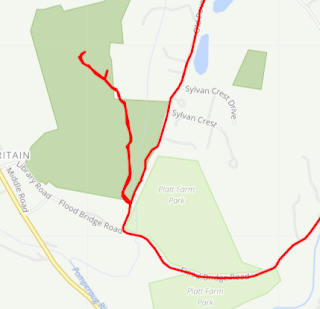 After riding the dirt section of Flood Bridge we turned right into what looked like someone's driveway. There was a house on the right and barns on the left but according to the town map it was a road, and a nice dirt road at that.  The dirt road ended at a parking lot but it continued on as a trail.  Had I checked my Garmin I would have figured out that we immediately missed the turn but I had it in battery saver mode and the screen kept blanking out. Gavin later told me about it (he has the 830) and said you have to turn that off because its super annoying. So, we ended up riding up a trail for almost a mile and then decided to turn around and that's when I found the turn off. 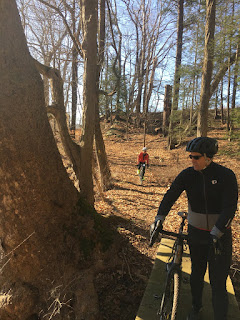 Of course by this time Scott, who was on his road bike had enough trail riding, and decided he would take to the road and meet us there. I descended down to the old road, which was quite nice and then over a nice bridge.  This new route was looking really hopeful. 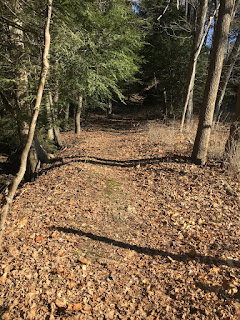 However, once it headed back into the woods, all that was dashed away, or should I say washed away. The old right of way was washed out.  There was some semblance of a trail but riding up through here but on a gravel bike, even with Granny Gears, it was going to be a nearly impossible climb. 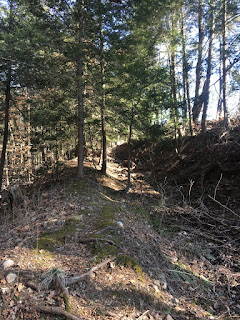 My original plan was to descend this section, which would have been tough but doable. 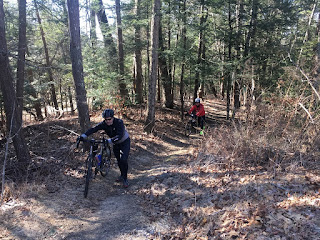 As you can see this one section quickly turned into Napoleon's Death March but once on Poverty Hollow, it was recently chip sealed. We actually met up with Scott as he was riding towards Rt 67 through Heritage Village. At OOF, Gavin brought a candle for my Croissant and they all sung Happy Birthday for me. We left OOF and the boys started right back to Exit 14 and after a few fist bumps and thank yous I broke off and started climbing up Flag Swamp Road. 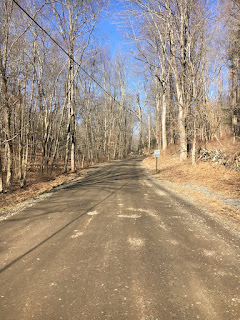 I decided it would be better to take the route I had originally planned, mainly because after hearing about West Mountain I preferred to ride down it rather than up. 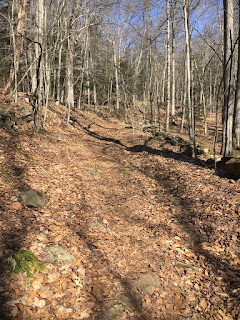 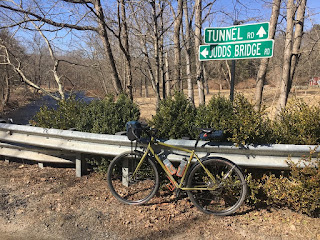 I toyed with the idea of heading up Battle Swamp and taking a more direct route to Nichols Road but then I decided I wanted to also ride through the tunnel. 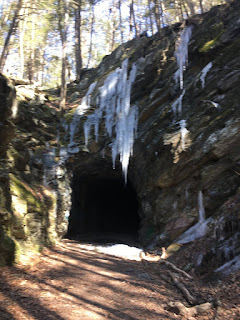 There was some ice on the tunnel floor but not nearly as much as what I have seen in the past. Still, I played it safe and walked the icy sections. Coming out of the tunnel I continued down the old road bed and it was really nice and free of people. I did, however, have to go onto the road due to a huge ice pond that formed in the middle towards the end.

Once on the road I headed out on the access road that comes in off of 199. Never did this one before and the climb was intense. I never realized what a big climb this was and it kept on coming like the Energizer Bunny for 2.4 miles with an average grade of almost 8%! 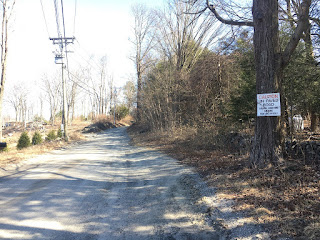 The climb was a necessary evil because it lines up perfectly with West Mountain Road. That sign you see there is really a false hood because the only way you are getting down this road is either on a Mountain Bike or a HMMWV! 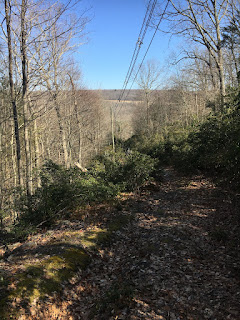 This picture doesn't do it justice but the trail was lined with Mountain Laurel, it was uneven due to the stream bed running through it. What I couldn't figure out is how the new telephone poles got here. 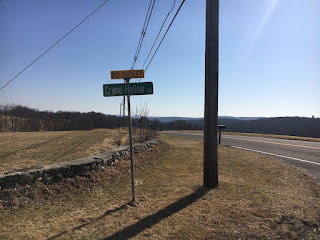 The next section of unknown territory was Crane Hollow.  The entrance to it is at the top of the hill the Newtown Lunartics call Camel Toe Hill. 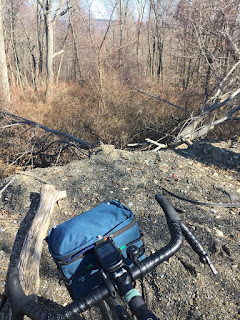 It might have gone through at one point but no longer. There wasn't even a stream to follow so I detoured to Weekeepeemee. The ride down to the other side of Crane Hollow was bone chilling. 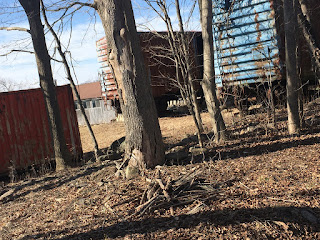 At this one house on Orchard Avenue they had two railroad box cars. That was weird because there was no train line remotely close enough to provide a siding this far in. They must have been brought in. 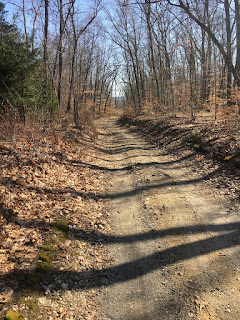 Orchard Avenue is a dirt road which gets increasingly difficult to navigate, if you were driving a vehicle, but totally fun on a gravel bike. 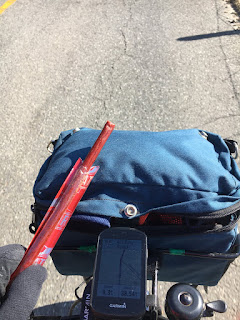 Before hitting the next dirt road I had my meat stick snack that I bought at the Roxbury Market. I think its common courtesy that if you use their facilities you buy something. I couldn't find the chips I wanted so I went with the meat stick, which was a good choice by this part of the ride. 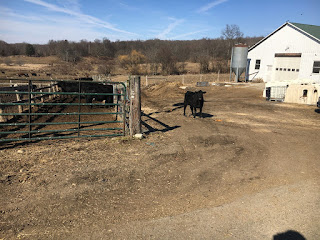 Turning onto Artillery Road, which also turned into another big climb and then it descends to cut through a cattle. An older calf appeared to have jumped the pen and was chewing on what looked like an old pumpkin. He was keenly aware of me but never moved away from his pumpkin. 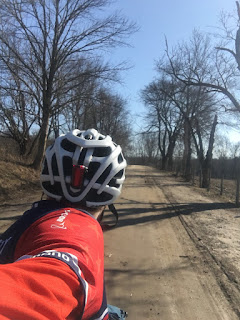 Another new dirt road was McVeigh Road. A nice flat, dirt climb up to Hamilton Road which then turns in Middle Turnpike, which is awesome route back to Woodbury without worry about all the cars on Rt 202. 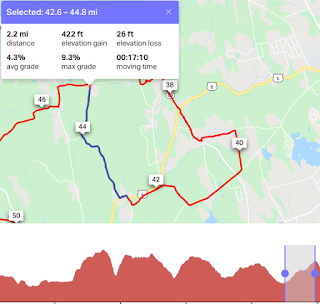 Crossing over Rt 202 I climbed up Quanopaug Trail only this time I took a right onto Cowles Road, the turn I missed when I came through here last month with Gavin, which was a nice climb in itself. Turning left onto Church Hill, yet another dirt road and a fast descent to Flanders Road. Then there were the two walls to climb on Brushy Hill and Peter Road. Crossed over the closed to Hazel Plain Bridge and then took all the dirt roads that I could muster back to the start point. I realized that I should have ridden the trail at Jacks Bridge, too. Next time. 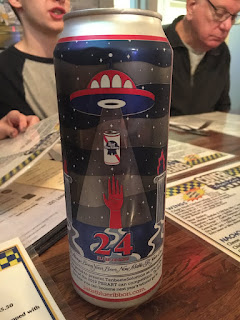 I celebrated my birthday at CoverTwo in Sandy Hook where you get your age in wings, only there is a cut off at 50. Still, not a bad deal, and its the only place I know where I can get tall boy of my favorite beer.