There have been a few roads on my to do list to see if they really go through or for that matter are truly dirt roads. With the early winter warm up taking place I was not going to ride the trainer again this Sunday so I headed out on the Sex Machine to hit a few of these roads.  Also, it would be a good test of some gear that I recently added to the bike as well as a pair of shoes that I brought out of retirement since my Lake303s are now out of action.


I rode down to the steel bridge from house and crossed over into Southbury. I rode up Fish Rock for the first time and I started shedding clothes. Good thing I had the handlebar bag! My first quest was to see of Sanford Road West actually went through. On the maps it showed a dead end, however, the property lines showed that there was still a right of way.  However, when I came out of North Georges Hill I noticed a dirt road off to the south and rode over to it and it started climbing.  The dirt road ended but the right of way continued.  I turned around and headed back to Sanford Road because that was my main objective. However, looking on the Southbury, CT GIS map they still show Nelson Road as a town road!

On the Southbury GIS map they show Sanford Road as a right of way but not owned by anyone at the moment. 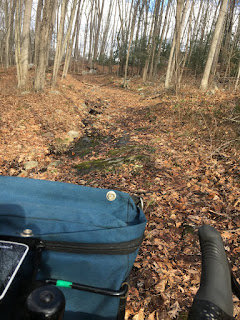 There is a small trail that goes up the west side of the ROW it's not very rideable unless you were on a mountain bike and where the ROW meets Sanford East there are numerous trees down blocking the connection to Sanford Road East. The trail that I was on popped out onto someone's driveway and there was chain blocking it at the top of the hill. Probably to prevent people from driving down it thinking it was the continuation of the road. Sanford East is dirt and then after crossing over Jacobs Road and turning onto Sanford Road, it too was dirt. 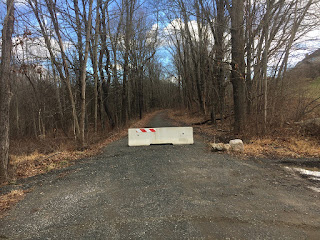 Then I rode down Jeremy Swamp road and at the intersection with Hulls Hill a Jersey Barrier was a sign of happiness. The continuation of Jeremy Swamp is a closed road and its not paved! 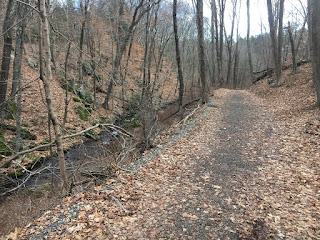 At the other end there is another Jersey Barrier signaling the end of the closed off portion of the road, however it keeps going and it's still an unimproved road. 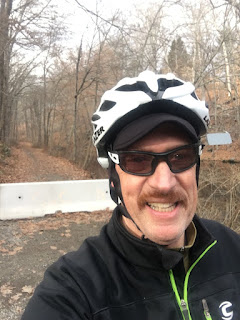 In fact the portion after the barrier was far worse than the closed off section. 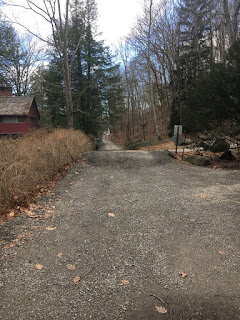 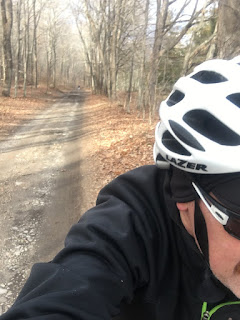 That was it for dirt roads on the east side of the Housatonic. There is one road on the south side of Moose Hill Road that I want to checkout but first I need to explore more of the Rock House Preserve to get a feeling if its worth trying to find a route through there. That then creates the dilemma of where do you go from there?  If I can found a trail from Webb Mountain back to Stevenson that would be great but there is still a lot of hardball in between. Not ideal. The other thought is to head over to the Larkin because at least thats dirt. 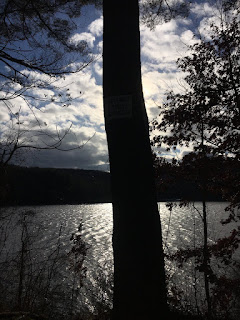 For this ride, however, I wanted to check out Josie's Ring Road in Monroe, a recent addition to the Roubaix to Brew dirt road map that I had found by accident, so I road down to the Stevenson Dam. 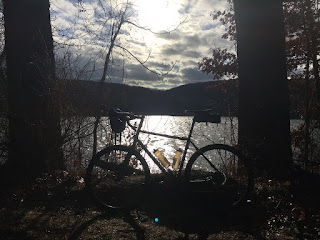 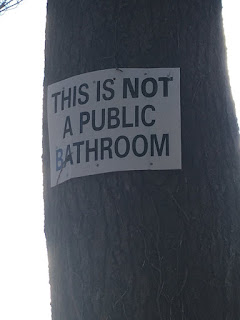 I guess the fishermen couldn't hold it 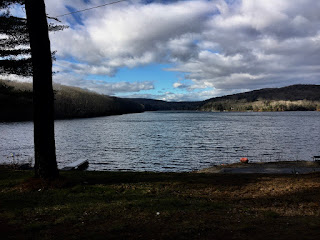 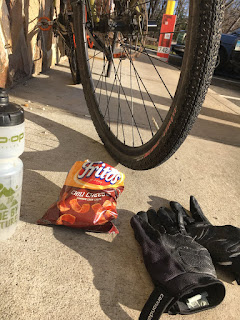 After snack I started climbing 111 and boy is that one helluva climb but a 1/4 the way up I veered off onto a side road that was probably the original Rt 111 which made climbing a lot easier. After a quick descent the pavement ended and Josie Ring turns to dirt and it was wonderful. The sun started to disappear and the temperature dropped. Fortunately I was wearing my gloves with the attached over mitts but I think it's time for a replacement.  I need something that I can slip on over my gloves that is at least water proof.  I need something that is split fingered, too. 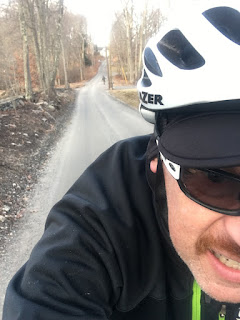 After Josie's Ring, I worked my way over to Garder Road which is a mostly flat road, dirt for 2 miles. 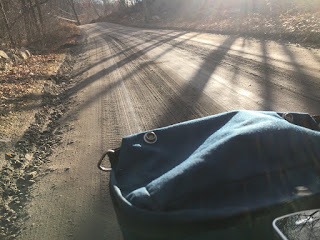 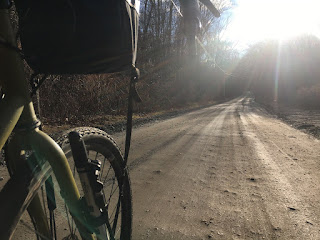 The end of Garder Road got really sloppy and I had to ride on the opposite side towards then end. 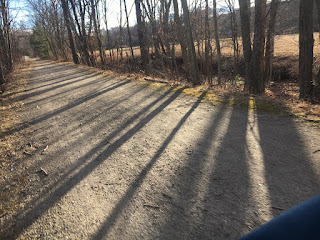 I took the rail trail down to Trumbull and then cut across on Tashua Road down to Velvet Street, which in Connecticut lore is said to be haunted with Melon Heads. The only thing I saw that could be remotely described as a Melon Head was a glacial erratic or BFR (big fuggin rock) atop another rock that had a somewhat Melon Head appearance.  I was, however, dismayed because I thought the dirt road was a lot longer than what I found. 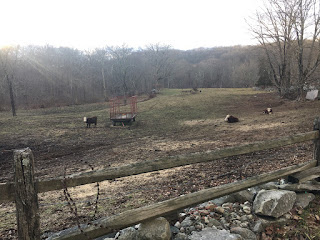 Then I headed over to Stanley Road to visit the cows. The farmer who lives here had classical music playing on loud speakers around his chicken coops. I wonder if it soothes the birds and thus they produce more eggs? 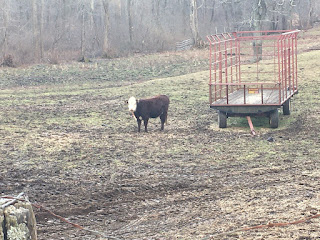 From here I climbed Guinea Road which lead me to Washbrook and from there I took Old Platts Hill and for the first time encountered a vehicle coming the other way. 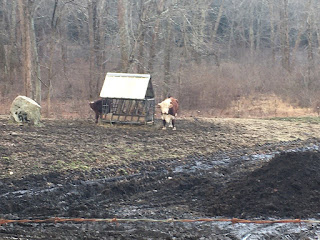 Then I took the usual way home, Beaver Dam, to Bentagrass, to Point of Rocks, to Old Echo Valley and finally Tamarack. I was going to make it a happy ending with a stop the Reverie Brewing Company but it was getting dark and I didn't have a light with me.  I need to figure out how to have a light along with my Cannondale Handlebar bag.