Since last year, I have been providing input on the CT Challenge Century Ride or what they are now calling the Grand Fondo.  I noticed this year they appeared to be using last year's route so I decided a couple of weeks before the event to recon the route to make sure there weren't any surprises. 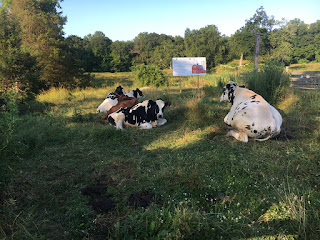 I headed out early Saturday and instead of riding Boggs Hill, I ride Boggs all the time so I knew there would be nothing unusual there, I headed down Rt 302 and stopped off to say hi to the cows at the Creamy. I think it's Karma that when a ride has cows it will be a great ride. 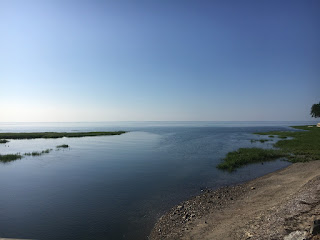 I added a little variation to my route by heading down to Sascoe Beach in Southport. It was also a good place to fill my water bottle and take in a nice view before heading north again.  I picked up the course on North Street and it was largely uneventful until I hit the Fred Zone (Valley Road to Rt 54 along the Saugatuck Reservoir). That's where you see all the cyclists on their really expensive bikes and usually in large groups all cocksizing one another while they do their 30 mile ride around the reservoir. 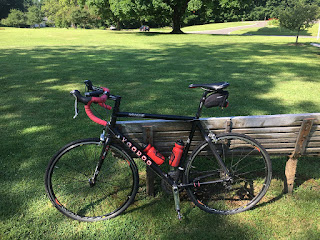 The first big hill on the course is the climb from the Redding Road House to the Redding Town Hall. It's a class 4 hill with an average grade of 6% for 1.17 miles and the steepest part maxing out at 12%. I didn't attack the climb as hard as I could have but I didn't take it lightly, either.  No PRs on this ride up though.  At the Town Hall I took the opportunity to use one of the porta-potties they have out for the Sunday concerts and then once again continued my ride north. 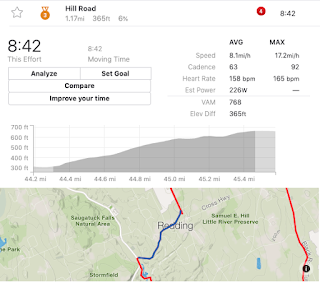 Riding up to New Milford was pretty uneventful until I got to Erikson Road where the New Milford Dog Pound is located. There were a lot of markings on the road and here and there various construction vehicles associated with paving. It seemed to me that the town was going to pave the road in couple of weeks and would been by the time of the event this road would be a mess. In fact, afterwards I contacted Tom O'Brien, one of the founders of the Western New England Greenway, as well as the New Milford Greenway, who by the way is running for Mayor of New Milford this fall, to see if he could find from the Highway Department what the paving schedule will be. He got back to me saying that by the time the event comes through the road will be torn up but not paved. I relayed that to the organizers who made a change to the route. 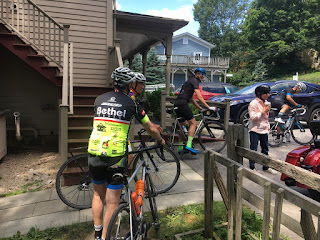 Arriving in New Preston I headed to my favorite eatery, The Bakery on 9 Main, and ran into Stephen Badger and his crew of super fast riders. There was also a group of the former Bethel Cyclist group there as well. This is a popular refueling point for cyclists heading north to do a lap or two at Lake Waramaug. 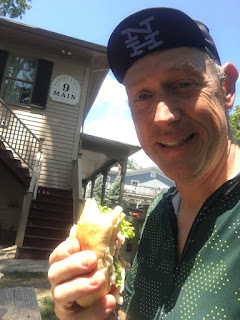 I ordered the Soprano, a sub sandwich with salami, capricol, mozzarella, lettuce and tomato. It was so big I was only able to heat half. I had the deli wrap the other section in tin foil and figured I would eat it somewhere a long the way or when I got home. 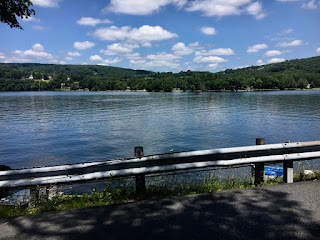 Then I headed out for a lap around the lake. I usually ride the lake clockwise but today I went in the opposite direction because I was contemplating making a beer stop at Kent Falls.  Getting to Kent Falls is tricky if you don't want to ride dirt roads, you basically have to ride north and then swing back.  After a full lap and then some I headed up Anderson Acres Road towards Kent Hollow and when I got into the Hollow I decided to skip the Brewery and make my way north towards Warren, CT.  The climb out of the Hollow on Kent Hollow Road was insane! 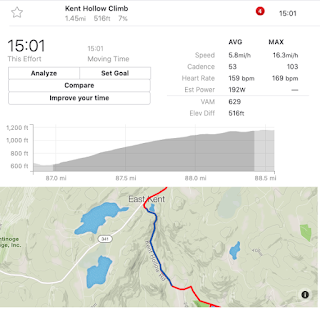 Another Class 4 hill with an average 7% grade over 1.45 miles and the steepest section was 16.5%! That was a total surprise. I certainly didn't set any records with that climb especially with a half a sub sandwich sitting my stomach. I was going so slow up that hill that the bugs were going faster than me.  When I got to Route 341 I took a breather, drank a lot of water and then headed back to Route 202. 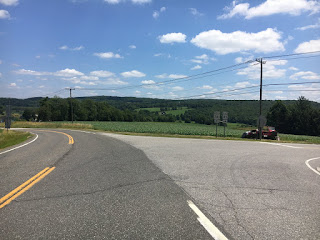 It seemed to take for ever to get down Rt 202 from the intersection of 341 and 202 to Rt 47, Bee Brook Road. For some reason I thought it was going to be close but it turns out its really over two miles.  The ride down Rt 47 was the same as it always is, a flat descent with breaks in the pavement that makes it almost unenjoyable.  Still, it got my average speed back up and it's a good prep for the next big climb, Rt 47 out of Washington Depot to the center of Washington, CT. 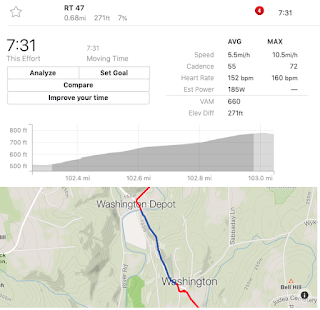 Another Strava class 4 hill on the route and while not as long as the other two after riding 100 miles it's quite a formidable challenge.  On the climb I started to feel some slight muscle tensing like I was going to cramp but nothing came of it.  At the top of the hill there was a fair just breaking down in the town square so I went in search of some cold water and found lemonade! I had a 4 glasses and then filled up my water bottles. 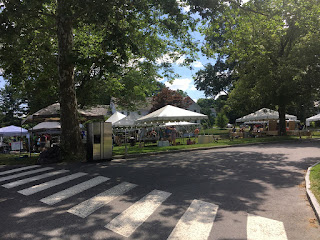 The ride to Roxbury was a blur as I hit the rollers and didn't really notice that one wall that always gets me on Rt 199. After riding a 100 miles and knowing that I still had another 24 miles to go I just wanted to get back. Again, a long the way I felt some more muscle spasms in my legs and hips. I thought I was drinking enough water. 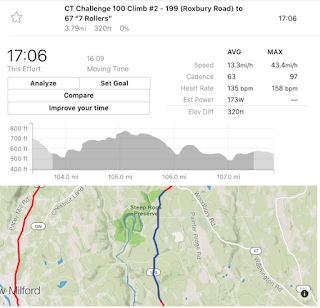 Once through Roxbury and headed back to Southbury via Brown Brook I discovered that this part of the road was being chip sealed.  The town had laid down the oil and put the pea gravel down but had not yet done the stop coat of oil yet, which seems to be a new approach to this process. The cycling jury is still out on whether this presents a hazard to us or not because if it go wet does it mean it will be slippery? It seems that could be the case because when you look at it, the coating looks shiny. 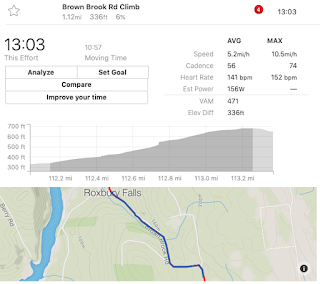 On the climb up, which by the way is yet another formidable class 4 hill, I started feeling muscle spams in my legs, only this time both legs cramped. I stopped on the side of the road and drank the rest of my water while I writhed in agony waiting for my knees and hamstrings to relax. When they did I started riding again and never had another issue.

Crossing back into Newtown I debated with myself whether to do the 12 scoop challenge at Holy Cow, which is if you can eat 12 scoops of ice cream, its no charge, you get a T-Shirt and they take your picture. I meant to bring my own spoon because the plastic spoon they give you is really flimsy and would just slow me down. 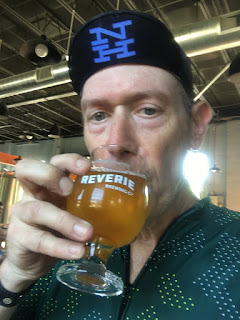 In the end I opted for a beer stop at Reverie Brewing.  After a few glasses of water I enjoyed a 10 ounce pour of the Workman's Workout lager.  The beer made a definite happy ending to a long ride!