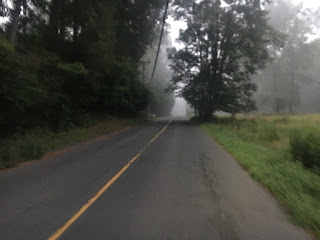 Wednesday was just like any other typical summer morning in which I headed out before 0600 to ride my Delightful Bagel route, a 22 mile route around Newtown that has some decent climbing, great downhills and a stop at Bagel Delight on Church Hill Road for a bagel with cream cheese.  This morning, however, I left a little earlier and met Paul Mayer, a fellow Newtown Lunartics cyclist at the bottom of Butterfield Road. We then rode up to the War Memorial where we met Scott Davidow, a new addition to our little cycling club. 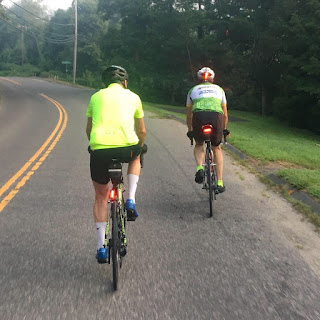 The temperature this summer morning was in the upper 50s and it was pretty foggy in coming up out of the gravity well where I live.  On the descent down the Taunton Steps after passing Plum Trees Road I hit a small pot hole and one of my water bottles came out. Scott, who was following me hit it and Paul got sprayed by it. 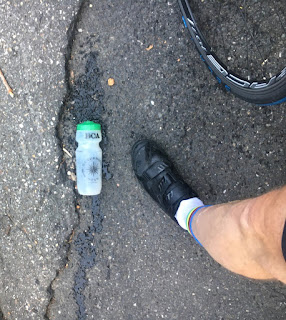 The top of the water bottle was toast but the bottle portion was fine so picked it up and put it back on the bike. It's one of the bottles that I got from riding F2G2 (Berkshire Cycling Association's Fall Foliage Gravel Grinder) and I have plenty of caps at home to keep using it. Getting back to town we stopped at Bagel Delight and had breakfast outside while enjoying the cool morning. Once we were done, we headed off on our separate ways to our respective homes. 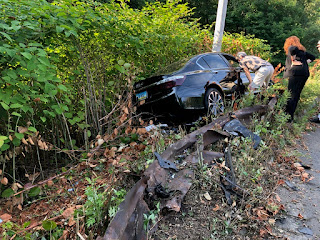 I was riding down the Boulevard and as I was nearing the Railroad Bridge I heard a screech like tires skidding and then a quick crashing sound. My first thought was that a car crashed on Route 84 which is 100 yards from the railroad bridge but it was too loud to have come from the highway. As I approached the bridge I slowed down and saw a lot of dust and smelled anti-freeze but couldn't see anything. When I looked to my right after crossing the bridge is when I saw the car on the other side of the guard rail.


A woman and a man were approaching the vehicle from the road as I hopped off my bike and proceeded to call 911.  The guy in the car was moaning and must have been in a lot of pain.  The airbags had deployed and he probably had broken ribs. A couple of minutes later the police showed up, three cars in fact. As I was leaving I overheard a woman say that the guy passed her further back on the road and he must have been going 80 miles an hour.