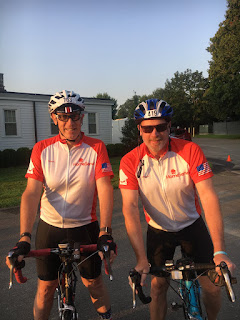 This is our third CT Challenge. Rich (r) is our company CFO and a cancer survivor. 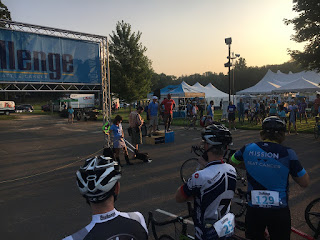 There were some changes this year. The fund raising minimum for the Fondo (Century Ride) was lowered and with the help of the company I was able to hit for once, in fact I exceeded it.  Another change to the event was that they were sending us off at 6:30 AM, which for this distance is much better. 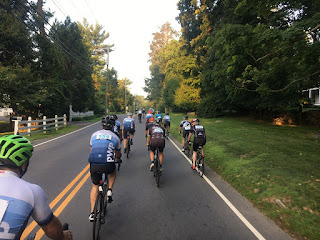 We left in waves. Rich and I were on the first one and the temperature was perfect. We aren't fast but we are steady.  This time around I brought nothing to eat with me, just water in my bottles because there is always feast at the first rest stop. 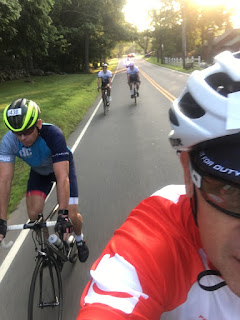 From the start I had a lot of energy and I got a little ahead of Rich so backed down on North Street so that he could catch up. 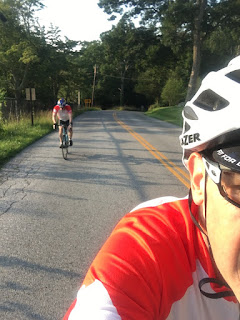 The first climb was on Valley Road in Weston and Rich hung in impressively. We stuck together the rest of the way up Rt 53. After turning north again at the top of the reservoir I passed a guy a in USMES kit. I have seen this same guy riding in Army kit on Hopewell Road but when I checked Strava Flyby later, he wasn't one there.  I recently joined USMES and I want to set up a weekly ride in our area and looking for other members. 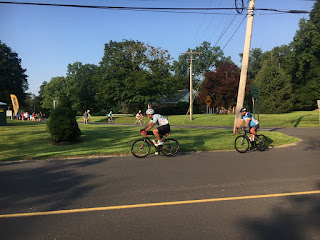 But the first hill was on Rt 107 in Redding and this time I attacked the climb.  I was able to shave off almost two minutes from the last time I rode it and I got a PR this time, too.  However, the first rest stop wasn't even open yet. Apparently, someone had locked the keys in the truck and were still on the way, probably following the same route as all the cyclists and stuck behind them. 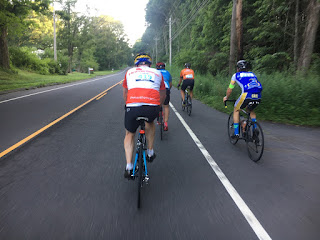 I was able to fill a bottle from the hose and then we were off again towards Bethel with Rich pulling. In fact, he pulled most of the way until we got to the big descent into the center of town. On the descent down Chestnut Hill Road is fast and being heavier than most gravity makes me really fast. Riding up Plumtrees got a little hairy. The driver of a silver sedan didn't like the fact that he had to share the road with a bunch of cyclists. Clearly, he doesn't know what the laws are in this state. At one point he stopped short of the riders in front of me nearly causing an accident. The license place was CT 968-UFV. 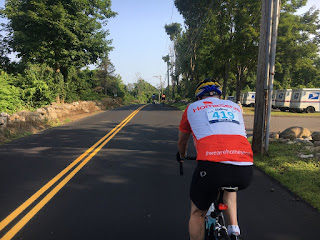 Rich continued to pull through Brookfield. There was Black Butter on Pocono Road which made riding through here really smooth. The night before I had studied the course and had it loaded on my Garmin but didn't have the routing running since I regularly ride these roads.  One thing I couldn't fathom was why they didn't route us up Ironworks Hill. Instead the route continued down Old Middle Road and in the middle of the descent turned a hard right onto Baldwin Hill. There was only a 75 mile Route sign indicating the turn so if you were on the 100 mile ride you would obviously ignore it and continue towards Erikson Road in New Milford. Only, now one knew, except for myself that Erikson Road was currently under construction.  I turned back and when I got back to the turn Rich caught up and we climbed up Baldwin Hill, which was another 12% climb! 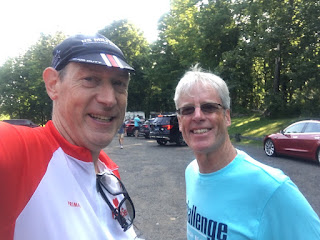 The descent down Pumpkin Hill was refreshing and finally the second rest stop at Lover's Leap, where I ran into a friend of mine, Tom O'Brien who was volunteering at the rest stop.  It was great to finally get some food into me because by this time I was starving. I probably ate a little too much because when we got going again I felt really full. 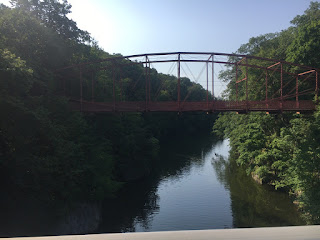 The ride through New Milford along Grove Street never changes. It's a bike route with Sharrows and Share the Road signs and cars are still whizzing by you and some drivers still honk, too.  Once on 202, however, there is a nice shoulder and it's a shallow ascent to New Preston. 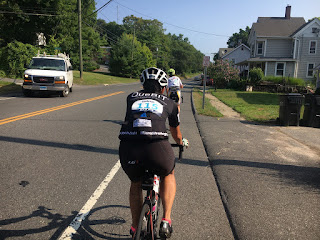 We rode with this couple from Rhode Island for a bit but them dropped them on the first hill.  There are two pretty good hills on Rt 202 on the way to New Preston but they are not insane. 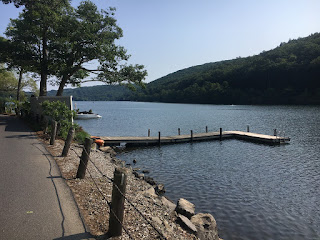 While climbing up Rt 45 to Lake Waramug, Paul Mayer, a Newtown Lunartic, passed me going the other direction. He didn't recognize me, though and I kept going with Rich hot on my tail. 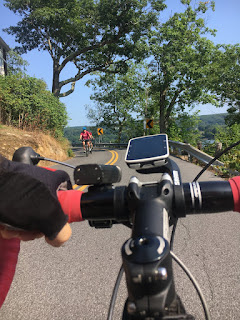 Since West Shore Road is so flat I took off and thought Rich was behind me but it turned out it was someone in similar kit that I mistook for him. We were hammering! We passed everyone in front of us. It was like a sprint to the finish! Only in this case, it was just lunch. 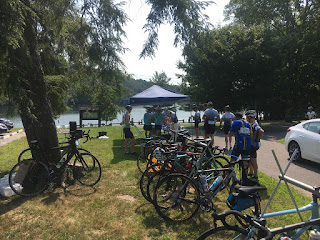 Lunch was at the State Park and Rich's wife, Kristin, was there to greet us as she was working the rest stop. It was like a family reunion for Rich because a little bit later, Rich's parents who live in Warren also showed up. Rich and I split a wrap. I couldn't eat a whole one and everything and once again I think I over ate again. 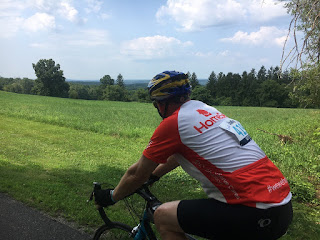 The biggest climb of the day was next, Rt 47 from Washington Depot up to the center of Washington.  Another class 4 hill, 7% average grade for about a mile but I was feeling great and just went right up with Rich right behind me.  Instead of running down Rt 199 to Roxbury the route continued down Rt 47 and then turned onto Painter Ridge. I was really impressed with this change. I think the change came out of necessity because the rest top in Roxbury was moved from the Town Hall to the church on Rt 317. 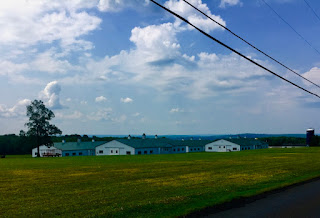 I love riding Painter Ridge because of all the great views.  Initially it's the Shepaug River Valley and then over by Topland Farms you are looking south towards Southbury and Newtown. The cows were no where to be seen today, however.  As I mentioned before, the Roxbury rest stop was on Rt 317 at the church before the intersection with Rt 67 but Rich and I didn't stop because we were still full from lunch so we continued south towards the next and last big climb on the route, to me at least. 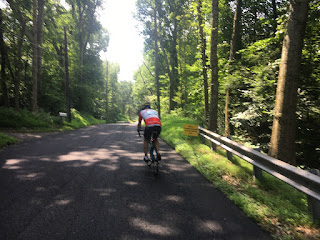 The climb up Brown Brook is another class 4 hill with a 6% average grade for 1.12 miles and once again Rich was out front leading the way!  Brown Brook was still gravelly after recently been chip sealed but when we got into Southbury there was an extra coating of tar on top of the chips. 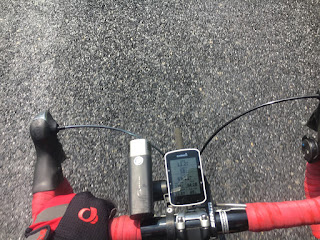 It the surface is shiny and I wonder if it will be slippery if it gets wet.  That wasn't happening today, though. The weather, today, was perfect. 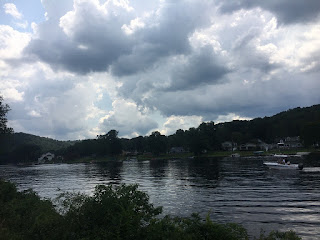 After descending down Purchase Brook the on River Road and seeing the water makes you want to jump right in. However, those clouds appeared to be a little threatening. 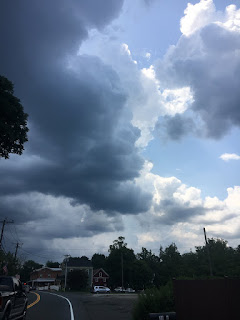 Even more so by the time we got to Sandy Hook Center. We stopped at the rest stop on Oak View and I recognized most of the girls working there from my daughter's high school dance team.  We were told that there was rain moving towards us from Monroe. 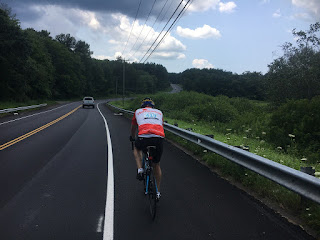 Back on the road and riding through Newtown we did get a little spritz and it felt really good but it never amounted to anything.  Apparently the last rest stop, on Rt 58 in Redding had pizza but we didn't stop. 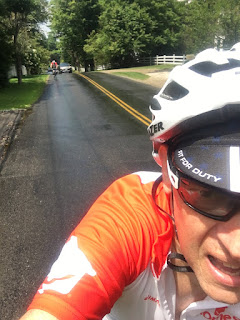 By the time we got to Fairfield, however, we noticed that it rained hard down here and we were glad we missed it. 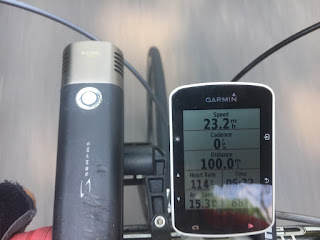 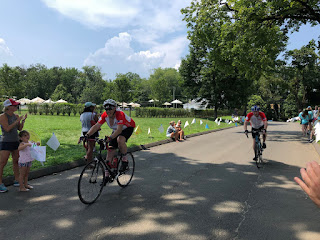 Our team captured our finish! 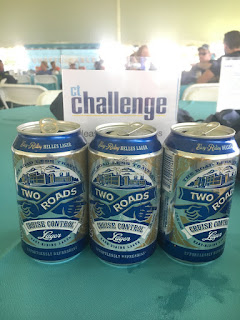 These guys went down nicely .
Another 100 mile ride with another happy ending!