Last week I met with Paula and we walked my re-route at the Mulikin Trail and she suggested some changes.  Going back Sunday morning and incorporated those and had to make a few more because the ground in which she said to move the trail to was just too soft.  Bucky met me up on the trail and helped do some cutting. I probably have to go back one more time to finalize the final route and then work can begin. 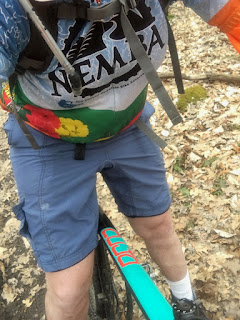 After lunch, I swung by Bucky's to get him for a ride and ran into his mother and father. Mountain biking is infectious because now his father, Frank, is thinking about getting a Cujo and his mother, Page, just boat a Giant Liv. Apparently, they want to start hitting the trails, too. 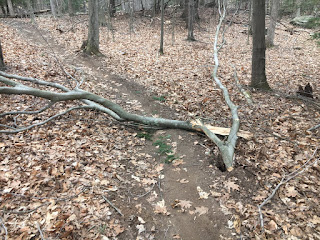 We rode up the Tree Stand trail to the Mulikin and then on up to Poly Brody. Didn't spend any time looking at the route since the temperature was 39 degrees and I did this crazy thing by wearing shorts and no jacket.  Heading down the Gussy we found a blowdown but didn't have time to take care of it.  Its small enough that it is an easy hop. 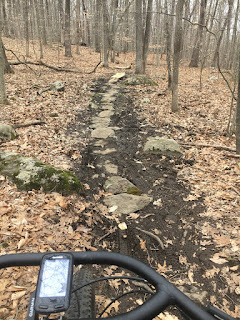 Headed back on the DSP.  There are some sections of this trail that I hate and others that I love.  One that I hate is the fact that who ever made this trail took it directly through a bog and never did anything about.  It seems some other trail gnome has taken it upon himself the to fix the situation.  The armoring is great but that unfinished bridge really ruins the flow.  Hopefully, who ever is working on that will remove it and just finish armoring the trail.