I wanted to ride to Ovens of France this morning but it was raining.  Seeing that the expected high temperature was going to be pushing almost 60 degrees by 5 PM I brought the bike to work and decided I would stop on the way home and get a little riding in.

I think had I gotten to Aspetauk Part 30 minutes earlier I would have donned shorts but as I was getting ready it just didn't feel warm enough for shorts.  In fact I was going to just wear a long sleeved jersey and then changed my mind and when with a riding jacket instead. 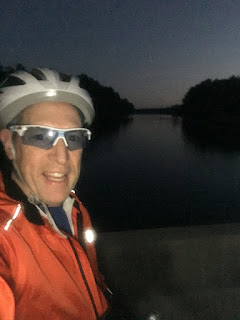 It was a shorter route on roads that I have ridden before but since it was rush hour I tried to minimize my exposure to those that were heading home (North and East).  I switched from flashing light to steady beam on Park Street because it had finally gotten dark.  I will have to go back and see what I can tweak in this route to get a little more mileage out it.

Email ThisBlogThis!Share to TwitterShare to FacebookShare to Pinterest
Labels: Ride after Work