Cannondale Cujo 1: It's 10 PM, do you know where your children are?

From the first time I saw a fat bike on a Route 66 bike race series almost 10 years ago, I have always wanted a fat bike but couldn't justify getting one because I don't want further competition of my wintry activities.  However, in a 1 to 3 inch snowfall, I will still ride my mountain bike and having a wider tire makes a lot of sense. 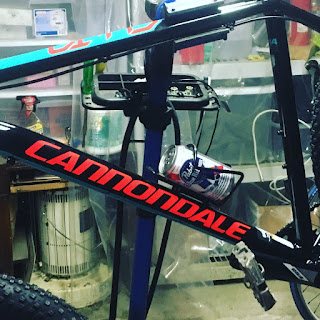 With the introduction of the 27+ wheel size or what we came to learn after the post 29" craze, 650b wheel rim, a whole new market of making fat bikes a lot more feasible for year round riding came to being.  Rolling a 3 inch tire at 20 to 30 psi not only will give you an extra grippy tire, but just enough cushion to make the ride a little smoother. 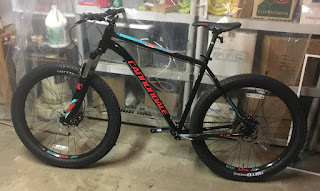 I decided to thin my herd by selling the Spot and Surly and depending upon the proceeds from those two sales purchase a Mid Fat bike.  Originally, I was targeting a Bad Habit but that was just too far out of my price range so I spent some time with Shawn at the Bicycle Center to get his opinion on what I should get and he recommended the Cannondale Cujo 1.  It comes as a 1x11 with a Rockshox air fork and a decent component group, Hayes disc brakes and Sram XG rear derailleur.  Since it comes tubeless ready I had Shawn make the conversion.

After adding pedals and a carbon seatpost, removing the reflectors and adding my Brooks saddle it was 9:30 PM and figured, lets throw some lights on and go for a test ride. 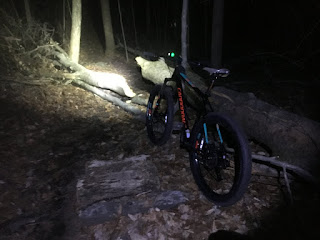 Headed out to Upper Paugussett for the basic loop which consists of riding up the Poly Brody Forest Road to the Upper Gussy trail head and then down the Upper Gussy and then out on Jeep road to Sanford Road.  It was really windy earlier that day there were a few blow downs here and there but no trail blockages, that is until I came upon this one right after the Snowtober Reroute. 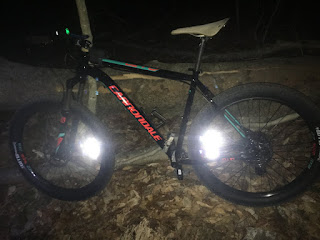 I took this opportunity to get a good side view shot of the Cujo when I discovered that I left the wheel reflectors on the bike - DOH! 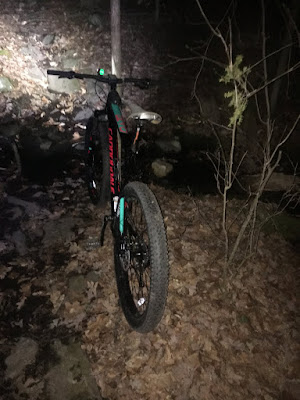 Further down the trail I found more blow downs but nothing really impeding the trail until that is one at this stream crossing.  A tree came down parallel to the trail but knocked a sapling down perpendicular to the trail.  Fortunately, the root structure came up with it and it was easy to move out of the way. The 1x11 gearing is perfect for trail riding.  I never felt like there wasn't enough gear for any of the climbs and on the descents and flats I was able to keep up a good pace with what I had.

I might have ridden the Gussy with the fork locked out but with the lower tire pressure I never felt like I needed more squish.  In fact, I blasted through the rock gardens like they weren't even there.

I am still getting used to the cornering.  It's like riding a 29er tire only the tread is stuck to the trail like a gastropod on a leaf.

I can't wait to ride more!