A Sunset stroll with Fat Amy

Initially, the Newtown Lunartics were going to make a late morning spin to Ovens of France (aka OOF), however by 10 AM it was still 15 degrees out and everyone, including myself bailed. After our midday guests took off I hopped on Fat Amy and headed down to the Pond Brook Boat Ramp.  I headed up the connector trail and instead of taking the blue trail to the Mulikin Trail, I decided to try my snowshoe trail. 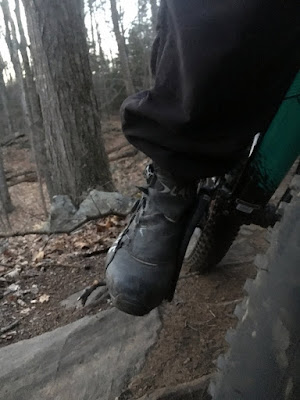 The snowshoe trail is more of a bushwhack that uses some old trails that I found between the blue trail and the Poly Brody Forest Road.  One of the trails is probably an old skidder path, it comes from where the Mulikin Trail turns east and runs past the Flight Simulator, a natural rock ramp that makes a four foot drop.  I lost the path a few times but eventually made my way down to the blue trail.  It wasn't pretty. 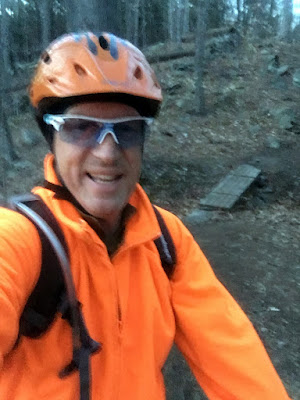 I then jumped on the Mulikin and was enjoying the trail up until it turns east off the old cart road and begins it's fall line ascent.  That section of the trail tends to get muddy during the spring thaw and it appears some mountain bikers didn't really consider what happens when it warms up because it was pretty rutted out. I wish people would stay off this part of the trail when it gets warm. 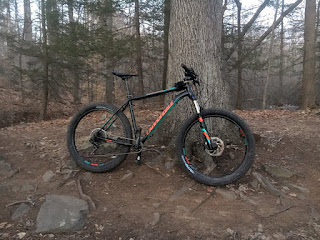 After the Mulikin, I jumped straight into the Unmarked and Unsanctioned Trail and was surprised at how smooth the trail was and how it seems to be getting better and better every time I ride it.  It still needs a few tweaks here and there, and a major reroute to by pass a wet area. 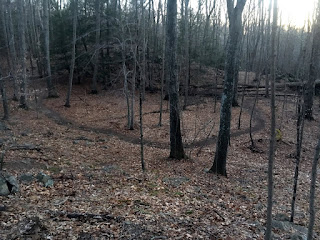 By the time I hit the Brew Crew Roller it was dark enough to warrant turning on the light.  The rustling off in the woods further motivated me to do so, too. 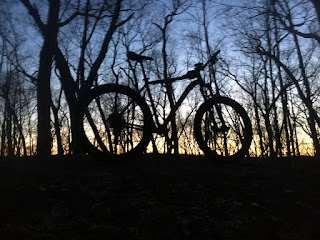 I finished off the Gussy and took the Reach Around to the Jeep Trail and then out to Sanford Road.  By this point the Garmin 705 said I had gone 4 miles and it was already on low battery.  I guess the battery has finally gone out on it.  I think I want to get a 520 and use my 800 as a back up.  Before I do that though, I think I going to have the 705 refurbished unless it's too expensive and just get the 520.  Instead of just riding home, I cut back through the forest on the Poly Brody and finished the ride down the Mulikin and out the connector to Pond Brook.