Cannondale Cujo 1: I stand corrected, it's a Midfat Bike

My Facebook Friends (reminds me of the Prejudice Commercials on Sunday mornings back in the 1970s) pointed out that what I am riding is a MID FAT bike and not a FAT BIKE.  Well, EXCUSE MEEEEeeee! I don't care if there is a difference, it still has fatter tires and therefore it's a fat bike for all I care. Semantics aside, this was the first Saturday in three months that I wasn't skinning up and telemark skiing down Windham Mountain in the Catskills because my son was still recovering from the flu. So I took Fat Amy across the river to play Where's Waldo. 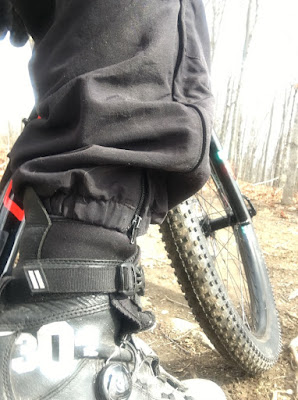 It must have been somewhere between 15 and 20 degrees when I started out and probably colder with the wind.  Wearing my Lake MXZ303 boots, blaze orange Columbia hunting jacket, and lobster gloves I couldn't fee the cold.  In fact, mid ride I had to open my jacket because I was getting pretty hot. 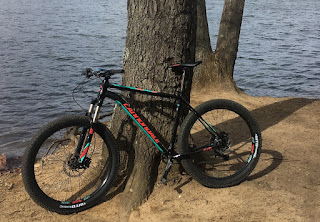 I think it's been almost two years since I last rode here and a lot has changed.  All the new trails on the north side of park are finished, there are new features, including a nice boardwalk with some up and overs in the middle of it that reminded me of the Moose Alley trail at Kingdom Trails, and some nice bridges.  I rode down to the lake and then started climbing up the main Waldo Trail. 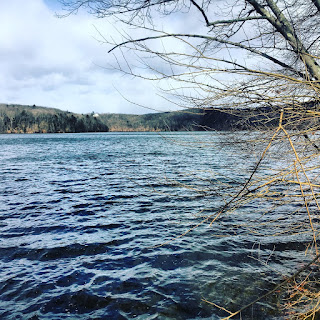 The one thing that I noticed off the bat is when I get up to speed and turning through corners, Fat Amy turns like my old 29" mountain bikes which always had a tendency to swing out wider. 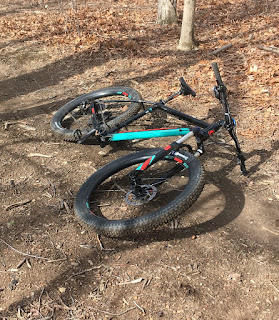 For the most part, the trails at Waldo were frozen but there were still some frost heaves that I crunched through.  On today's ride I remembered to unlock the fork and the ride was totally plush.  In fact, I would just point the bike on a line through a rock garden and just blaze through it.  A 29er tire never felt like this.  Looking forward to more rides in the near future.