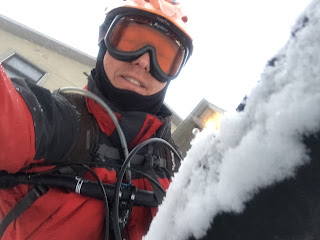 The Blizzard of 2017, or Nor'easter Stella as it was called by some in the weather community came on gradually Tuesday morning and by the time I got dressed and ready to ride we already had 4 to 5 inches of snow.  I went for little lighter attire this time around because my orange, Columbia Windstopper Hunting Jacket is just way to warm for anything greater than 25 degrees F.  However, rather than lobster gloves, I went with my OR overmits (sans liners) and a pair of ski glove liners. 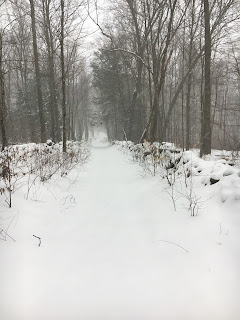 Not only getting down the driveway Tuesday morning was a challenge but the road I live on wasn't plowed yet and riding on it was tough.  By the time I hit the dirt road that leads to the state forest I thought of turning back but I was still optimistic that the riding would get better at some point. It didn't. 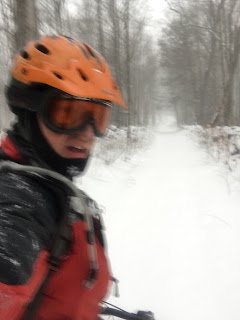 The section of the Poly Brody that is usually wet this time of year was a frozen sheet of ice that I had to walk.  Further up the access road I stopped near the same spot I stopped on Friday to take a few pictures.  Below is a Friday vs Tuesday. 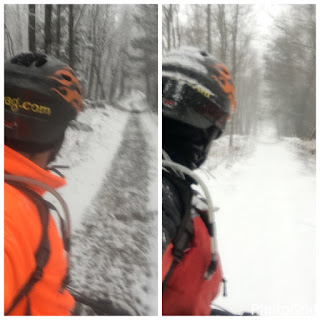 After the intersection with the Kissing Oak Trail (aka White Trail) I realized that my back brake was frozen. I think snow had gotten into the caliper and then froze.  When I discovered that I decided that I would just ride the fire road. 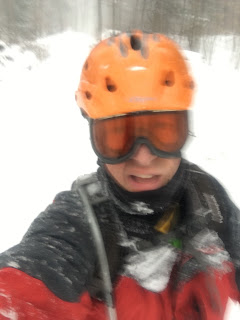 Having only the front brake meant I had to hang my rear as far back off the seat as I could to prevent an endo. I stopped near the Old Jalopy for a sip of water and then headed down to the road. 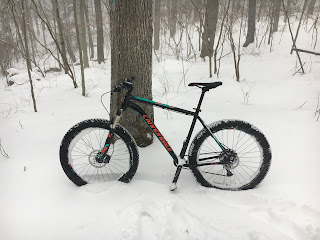 The road was finally plowed which made riding a lot easier. It was still slippery, though. 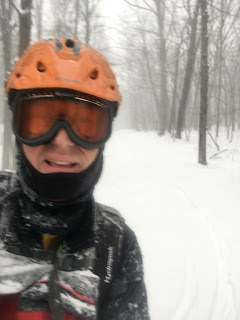 I think next time, in snow this deep I will XC skiing or snow shoeing.