Gavin and I headed out on a beautiful Sunday morning for a loop around the Saugatuck Reservoir.  It was in the low 30s so there weren't any Freds out, either. 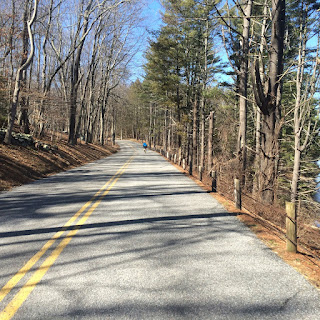 Half way up from Valley Forge on Newtown Turnpike I noticed that Gavin was no longer with me so I turned around and headed back to look for him.  Found him nursing his bike up the road looking for a place to change his tube. 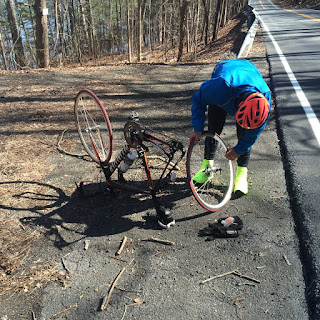 Somewhere along the way he hit something causing him to flat.  It was his first in his cycling career.  I hate when that happens and I tend to sacrifice weight for the peace of mind of riding on a sturdy tire with flat protection.  Although my trusty steed was giving me all sorts of headaches on the ride today. 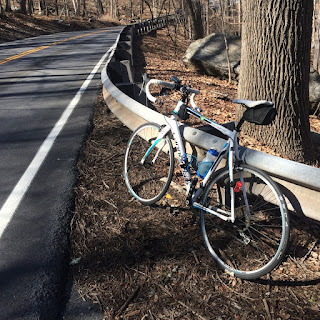 Chain was popping in and out of gears and the shifting was all off and I just got it back from the shop, too!  Turns out I had a bent rear hanger stemming from my bike crash in late December.

Gavin got his tire fixed and we headed on up the side of the reservoir to where Route 53 turns north and Newtown Turnpike heads east.  We attacked the big climb with everything we had.  We both set personal records on the 3 Bitches Strava segment and Gavin set a PR on Giles Hill.  I was hitting Giles hard but got some chain suck midway up requiring me to stop and fix the issue, dashing any chance of doing well. 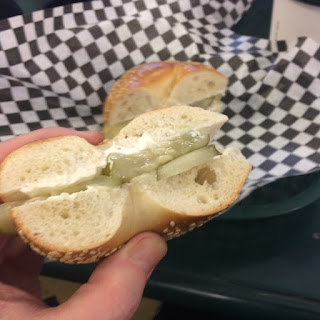 After Giles Hill, it was time for a snack at the Redding General Store and that's when I got the idea to ask for Pickles to be added to my bagel and cream cheese.  I had tried peppercinis on cream cheese bagel last fall but not everyone has them but everyone has pickles.  This is my new ride nosh!  Gavin and I parted company at Palestine Road to ride back to our respective homes. 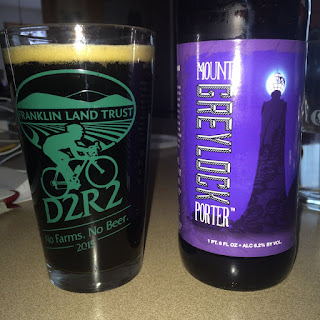