Newtown has approximately 8.5 miles of dirt roads but if you throw in a few old Rights of Ways and closed roads you get around 10 miles of dirt.  Steven Tramposh and I headed out on a Sunday morning before it was supposed to start snowing later in the day to try and ride most of the dirt roads that Newtown has to offer and to hit some dirt in Easton, Reading, and Monroe.  Finally, circle back on the Monroe Rail Trail and then I would probably hit Black Bridge and the Rail Road be through the Vineyard. 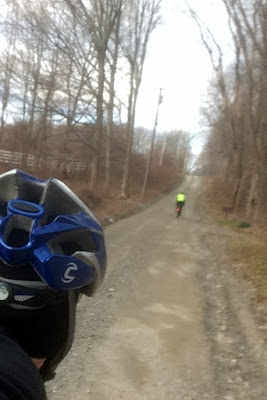 We worked our way down Pine Hill Road and then over to the closed portion of Platts Hill.  From there we road down Brushy Hill to Beaver Dam and then past the Cherry Grove Farm to Ox Hill.  I rode Ox Hill for the first time 10 days ago only in the other direction.  It's descent climb in this direction. 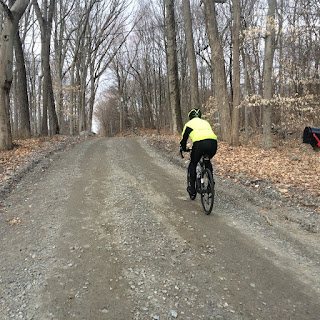 After Ox Hill we rode up Eden Hill to Town Line Rd, which is a dirt road that dead ends near the town line with Easton, sort of.  Actually the road is still there, only it's more an old Right of Way that is very rideable right now.  If it's wet, forget about.  This ROW connects to Old Hattertown Road in Easton which is a really nice dirt road descent to Poverty Hollow Road. 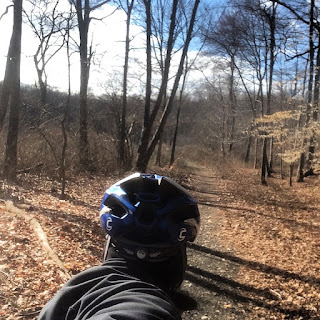 At the bottom of Poverty Hollow, the paved road turns 90 degrees and becomes Stepney Road but if stay straight, Poverty Hollow dead ends but the road keeps going and it's a really nice old gravel road. 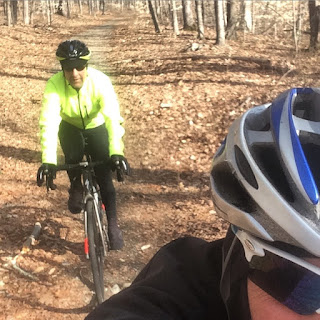 According to Steven, there is a section where the Aspetuck River flows under an old wooden bridge and if there was a prior heavy rain that area around the bridge is easily flooded.  Steven experienced this last December and the water was over his hubs!  From here we road over to Stanley Road in Monroe and then over to the Housatonic Rail Trail north and back to Newtown. 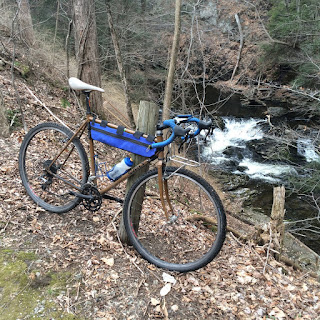 Riding by Steven's house and dropping him off I rode through the dirt roads through the Governor's fields and then over to Black Bridge Road.  Seeing the river for the first time in the light was kind of daunting. Crossing the bridge, however, or should I say riding it during daylight hours was much better than at night!