Following my ill fated attempt to help stimulate the New Haven economy I did come across some very different single speeds.  That is the one thing that I love about New Haven, it definitely has a bike culture.  If it wasn't for Yale University, downtown New Haven would look like Bridgeport.  Because of this you can't go far without seeing bikes and there are a plethora of single speeds.  In fact, two my bikes were sold down here but I didn't think I would see them.  The death fork is being used as a commuter to Union Station and the Bridgestone went to some college guy looking for winter commuter. 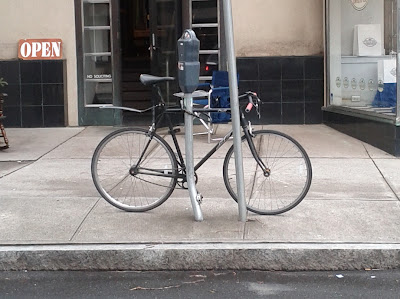 Parked in front of the Willoughby's Coffee Shop was this very nice Giant Via Single Speed.  Kind of posh if you ask me and no flip flop hub.  Further down the street was this SE Draft Fixie with a slack chain and downward pointing drop bars - my kind of bike.
at 6:02 PM