I knew that if I didn't go this morning I would be able to ski at all in the fine, fresh powder that got dumped on us here in New England.  The original forecast called fro 6-7" of snow but we ended up with somewhere in the neighborhood of 15"!  Driving home from work was fun last night but I left late enough that I barely saw anyone. 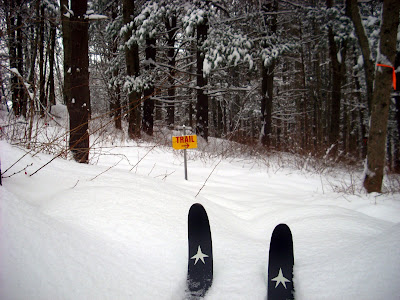 I got to the cul-de-sac at 7:30 am and quickly got ready, I got my gaiters and boots on at home to save time. Driving in XC boots is not that hard, granted there is an extra have inch of material sticking out of the front of my boot.  Yes, I still have 75mm, 3 pin bindings.  Heck, these Kneissel skis I have had since I was 16!.  However, with all the preparation, it was still a lot colder than I expected on my feet and fingers than I expected.  I planned ahead, however, by wearing liner socks and over mits but my feet and fingers still got cold. 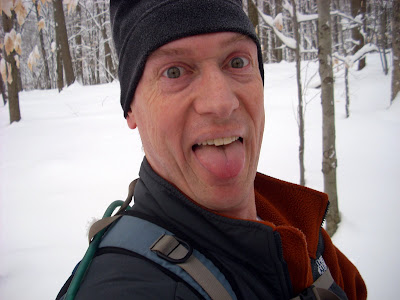 In fact, I almost bagged it not quite into the first mile because the toes on my right foot were absolutely freezing but when I started climbing my feet warmed up and that was that.  While I was the first to bust this track it appeared that someone was out the night before.  I tried following their track in the lower fields but lost it at Keating Lane.  They probably used the roads last night because the town probably hand not come back through for another plow. 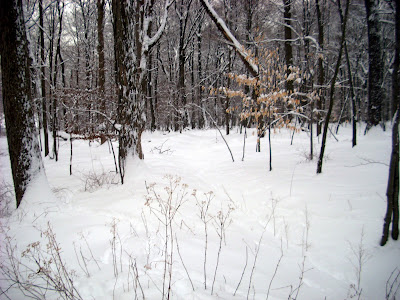 Paralleling the Recreational Trail was haphazard again.  I followed some deer paths, made my own paths, and skied along side the paved trail, which was plowed.  Finally I got to the old trail/road that led up to the Green Trail that starts at the water tank.  Still, it was still a slosh fest being the first one through. 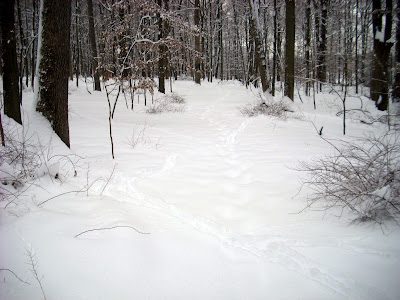 The whole back 40 was completely untouched save for a few deer tracks.  Following the trail was difficult, too, because I was trying to stay straight as possible.  At the cut off that leads back out to the fields, I stayed to the right and continued following the orange tape and green spray paint sploches.  It was a big descent and to back there after today, I think I would rather climb that than try to ski down through there because it's kind of steep. 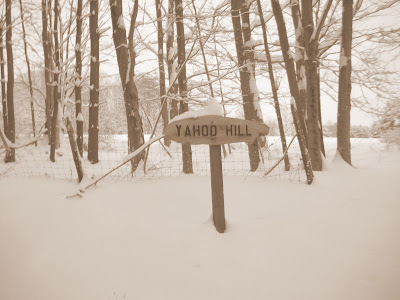 Finally, just south west of the corner of Wasserman Way and Nunnawalk Rd I found this sign for Yahoo Hill.

Here is a panorama shot looking north over Wasserman Way.  The hills in the background is the Ridge Line where Old Green Rd passes. 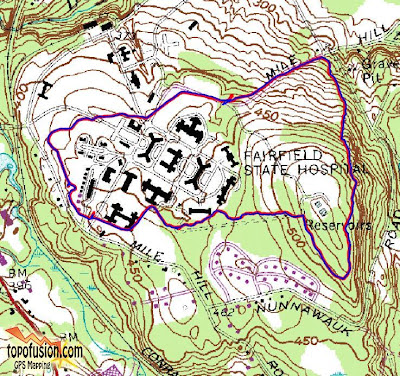 Finally got a decent track with the Lowrance Sierra.  I overlapped it again with the GarminEdge 705 and it was spot on!  Red is the Garmin and Blue is the Sierra but there is hardly any variance.  Looks like batteries were the issue.  Here is an interactive view of the route that I found with this new website competitor to MayMyRide called RideWithGPS.
at 12:59 PM