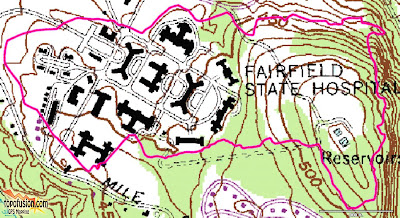 If it wasn't for the snow shoe tracks already in the snow Saturday afternoon would have been a slog fest.  I started out by Newtown's EOC and where the Recreation Trail starts and hooked into a nicely compressed track made by snow shoes.  There was another XC skier through here as well and I was able to really get moving.  That is of course until I hit the woods paralleling the Rec Trail.  The track got all twisty and turning which made it difficult to get a really good glide.  The track even disappeared half way up and I even crossed over to the other side to see if they went that way but they did not.  They must have taken the Rec Trail up to the Green Trail. 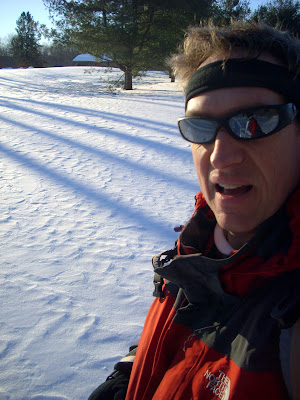 I was the first to bust a track on the old road that comes off the Rec Trail and connects with the Green Trail.  Skiing in three feet of snow is brutal and I was wearing my snowshoeing pants without my gaiters because they wouldn't fit and my ankles got cold pretty quick. 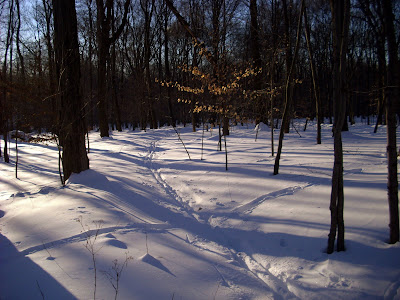 The Green trail on top of the ridge was really nice and through here I was able to really get moving.  It was great all the way around to the other side but then the snow shoers went an odd route that was tough to follow.  Then they went down the steep hill that I didn't want to attempt so it was back to busting my own track again. 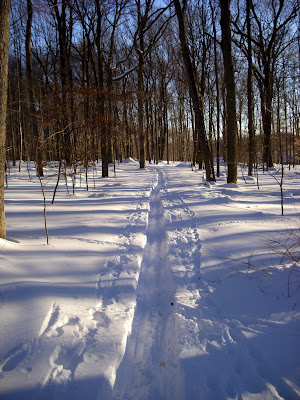 I came out on the horse trail that goes through the fields.  It looked like another XC skier might have headed down the trail towards the base of Yahoo Hill because the daylight was waning.  It appears that the snowshoers tried to stay in snow as much as possible trying to avoid crossing the road but I didn't think I had enough time to follow that track by this time so I busted some more of my own track and then found the snowshoe track again.  I followed that all the way back to may car. 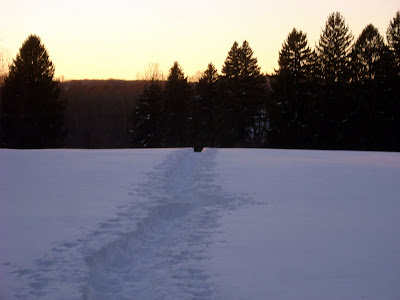