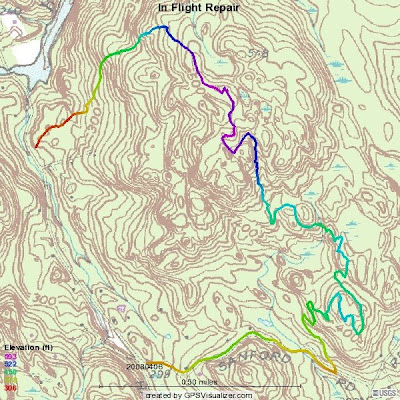 This morning's ride was an eye opener. Not because I hit the trail at 7:15 am but half way up the Brody Road, my chain broke! I was riding my Fixation as a mountain bike, which means to all of yous who haven't tasted the koolaid, I had a 26" wheel up front and one in the back.

Been meaning to try it this way and it wasn't bad but definitely noticed the difference not having a 29er wheel up front. The larger tire makes a big difference in the rough terrain, which is characteristic of the Upper Gussy Trail right now because it's still pretty much a raw trail. The one thing that helped was that I was rolling with WTB 2.35 Exiwolfs which have a lot of volume and they soften the ride a bit but it still felt like I was riding a washboard.

Ten minutes into the ride as I was climbing the second stage of the Brody Road, just past where the unofficial yellow trail splits off, my chain breaks. Good thing I keep all those tools in my Camel because I got to use most of them this morning. Had to replace two links. Took about 30 minutes to do the job. The rest of the climb up the Brody, I was a bit gun shy and walked the really steep part. 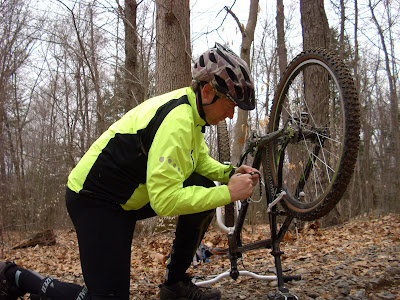 Got on the Upper Gussy and found some surprises. The guy who I am building the trail with from NBLA, Tom, took a little cutting license and did a number on a few of the downed logs on the trail. Some whose chief contribution deterred ATVs, sort of, as I found this past winter - the ATVer just when around the log, plowing through the underbrush. 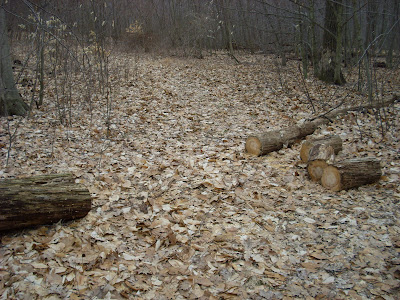 The downed fir tree is finally opened up! I think I have been dragging my bike over this tree for the past three years and now it's finally open. Actually, it's a little too open, about five feet wide, which is an open invite to the gas powered cockroach. Still, with a little work, I think this cut through can have an interesting terrain feature - a big up and over while at the same time cutting down on the width of the opening. Tom did cut one of the logs in half on a angle to be used for a ramp. 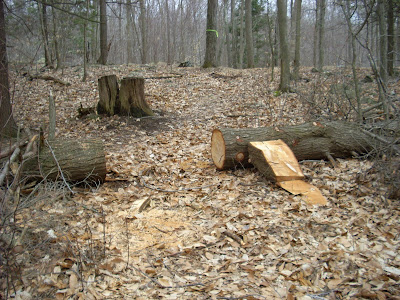 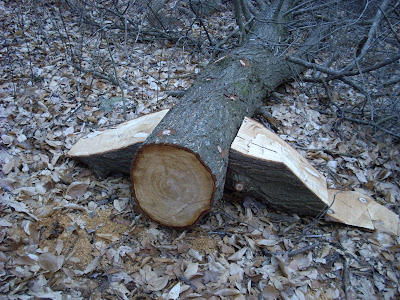 In order to put the squeeze on this opening, I am going to take that other log piece seen below in the background, dig a whole next to one of the guts and anchor it in position at the height of the ramp. Then secure the ramps to this post and thus limit the opening so that it should prevent the gas powered cockroaches from getting through at this point. Of course, they could just go around, which they have done in the past, but what I am going to do to deter that is try some corralling. Never-the-less, it was nice to finally ride through here without having to get off the bike and drag it over the tree. 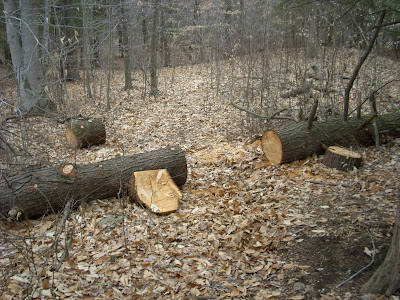 Below is the Fixation pretending to be a mountain bike. Might try another ride this way, fixed, down the Brody road to see what's that like. 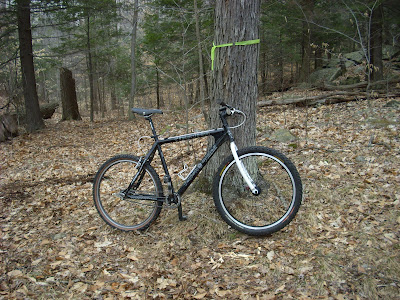 The chain repair took away the time I wanted to use to make a log ride before the old tree. Tom cut up this tree but not enough to destroy the log ride, in fact the pieces he made might come in handy to make some interesting features.

Also rode through the new water crossing but I will detail that in a post on the Upper Gussy Trail Blog. 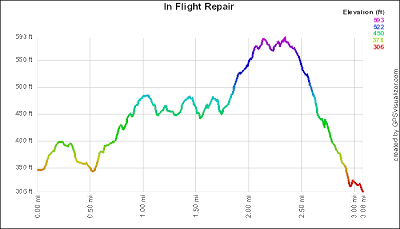 Clever log cutting; I'll have to get some lessons from Tom. The next few weekends are booked for me, but I'll get back to helping out. Nice work so far!