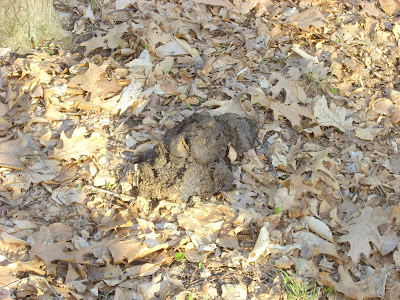 It's been almost two weeks and that lump of road apples appears to be still pretty solid. I don't think it's rained at all in the past week and it does appear to be drying out but not as fast as I was told it would. This weekend it might get a little assistance during the trail building session - someone could move it deeper into the woods.

The presence of road apples on trails does bring to light an issue that has plagued many trail users and that is horse poop management. I get the feeling that the equestriennes feel that it's natural and part of being out in the woods. One analogy that was offered somewhere was look at deer, they poop all over place. The only difference with deer is their poop tends to be the size of chocolate covered almonds and horse dootie is more like the size of an apple. I guess if you find something round on the side of the road, it's a road apple.

I followed one of the hits that the live usage tracker recorded to some site called Gates of Gold in which somebody referenced my initial EEDR post:

Rocking H : I understand what your saying . I have talked to you on the phone even. I am not knocking heads with you and we both want the same things :) I do feel trying to hold any form of government accountable isn't going to happen and I hope i am wrong. But how many others in other states see what is going on as far as horse back riding is going ? I am hoping others here will join in and give us there perspectives.

Just look at how some of these people think. I for one do not think the first few pictures are of horse droppings

Dude, are you blind? Of the four pictures in my Road Apples post, one of them was of bear dootie and the other three are indeed road apples. The funny thing about his comment is that he/she thinks that I think horses on trails are bad because of the fact that they poop. That wasn't the point of my post and I actually created an account and posted up that forum and chided him/her about the off handed remark. Of course, no one seems to have a poop management plan. If you want to see my reply, just scroll down till you see the post by "Iron Horse."

I am thinking that once the Upper Gussy Trail is finished and seeing that the local horse community has clear interest in the trail, they are after all helping to build it, that we may need to consider some sort of poop mitigation plan. Once a month, the trail is walked and any road apples that are in the tread way get kicked, brushed, or shoveled deeper into the woods. I wonder if this will work?
at 11:32 PM

Email ThisBlogThis!Share to TwitterShare to FacebookShare to Pinterest
Labels: EEDR