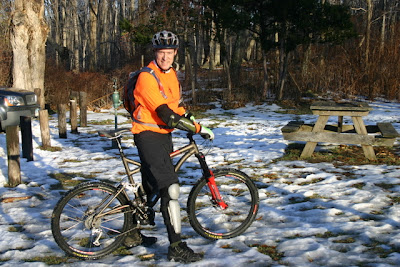 I am back on the 'Horse! Picked her up from EMS two weeks ago but due to the weather and the holidays just didn't have a chance to see how she runs after the almost month long visit to EMS. If they tuned it up, I sure can't tell if they did anything except address the issues that I brought it in for, which by the way appear to be resolved.

I went out to Collis P Huntington State Park today and started at the Dodgingtown lot. Conditions were absolutely crappy. If you weren't riding on crusty, slushy, packed snow/ice then it was wet everywhere and I should have thought to have brought my mud flaps! Doh!

I initially planned on doing just a circumference ride on the blue trail but had to give the singletrack that starts by the glacial erratic a shot. Half way through I thought my rear tire was a little low on air so I stopped to put some more in but the release valve snapped off and the tire immediately went flat. Good thing I had a spare tube on me.

This was a first for me because I don't think I have ever had to change a flat while on the trail. I initially snapped a tire lever trying to get the bead off the rim and I thought I was screwed but I found my other tire level and was able to get the tire open and changed tubes. I think I must have lost 30 to 40 minutes on that operation and had to cut my ride shorter.

Still the conditions were awful. Hopefully Monday will be better as I go for my last ride of 2007. 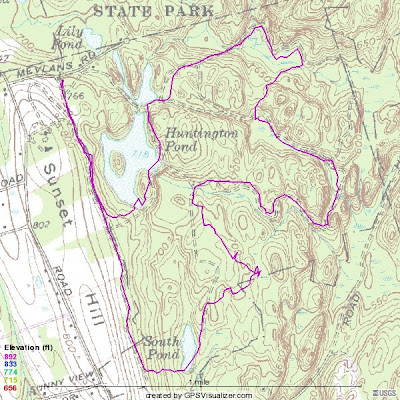 I did get to try out some new gear, though. It was in the 40s so I had a short sleeve jersey on, turtle neck, and my official Bikerag "Don't shoot me bro" blaze orange riding jersey.

Also tried out my new Camel, too. The Mule, which I thought, for some reason, would have more little compartments than my first hydration pack made by Sierra Designs. It is, however, more roomier with a main compartment that is not shared with the water bladder as in the SD one. On top is a media pouch which my Magellan fits nicely in. Have to try the GPSMAP60 and see if I get better reception here because on the strap, where I rode with it today, I got a horrible track. Good thing I had the Magellan for back up! 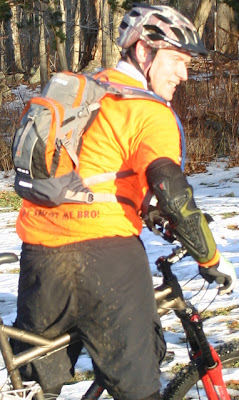 I really like it's fit and how forms to the body. I could barely tell it was even there at times. The 100 ml bladder will be nice in the summer. The SD has a 70 ml bladder.
at 11:43 PM