Single Speeding in the Snow

It was 20 degrees this morning when I got into the car and headed to Jump Hill. Was supposed to meet Tren at the intersection of Sunset Hill and Rte 58 in Bethel but the kids were up and I had to feed them before leaving. Also preparing for a cold weather ride was a lot of work. I hooked a with a group of guys that were light years beyond my capabilities but I think this ride was the biggest assembly of 29ers in Fairfield County that I have seen. I had my Qball and there were some guys from Bethel Cycle with a 21 lb Cannondale FG prototype and I think there was one other.

Here is the Cannondale: 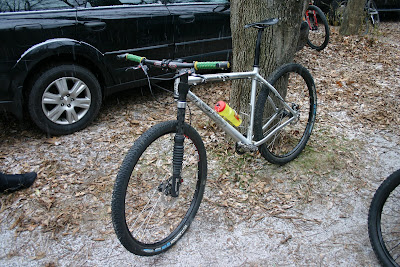 Here is my Qball: 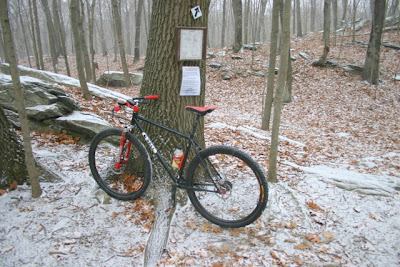 I didn't get a shot of the third 29er but if was fully and geary (full suspension and gears) something I haven't seen to date. One guy from Ridgefield showed up with a rigid Salsa A La Carte, now that rocks! 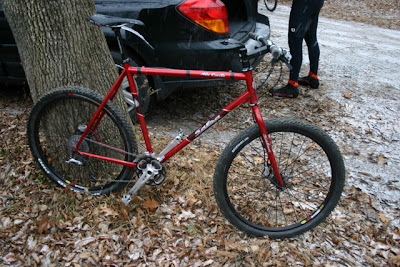 I put on sock liners and neoprene socks because I still don't have over booties. I think it's time to get a pair! I put on bib tights and BDU cutoffs and up top I had a wicking shortsleeve, turtle neck, henley, and my Columbia Windstopper Fleece. Started riding with a face mask and my Canondale gloves but the fingers got cold and had to switch to my deep freeze polar fleece gloves, that is until both my head and hands got way too hot and went to a knit cap and the C'dale gloves. 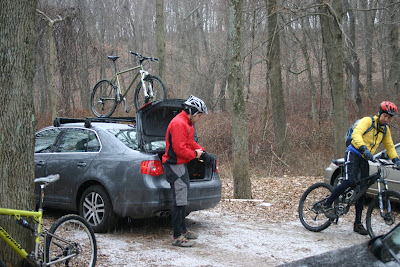 Jump Hill parking is tight and can hold 8 to 10 cars if you park with some care. There is Dave P. in red getting ready. There was this guy in an Escalade, obviously not a Mountain Biker that wanted to park but couldn't and was very upset that he couldn't. He could have parked on Country Club Lane but drove away disgusted. Guess he didn't like the idea of first come first serve. Below is Dave F., ready for action. 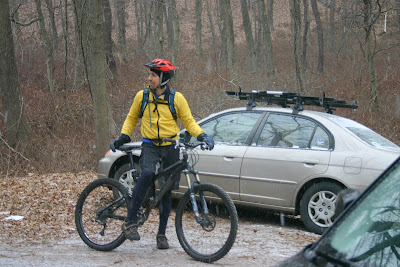 The trail from Jump Hill climbs a big hill. I decided to go last and by the time I got to top of the hill the rest of the riders were long gone! It seems I started out on the wrong foot from the get go. Riding a single speed with this crowd was not the best choice of bike but then again, I had no choice of bike. Then I was too cold, then I was too hot, brakes were squealing, my seatpost was too high, then it was too low. But I wasn't quitting, rather I had already planned on cutting this trip short.

Somewhere along the way Tren came back to get me. 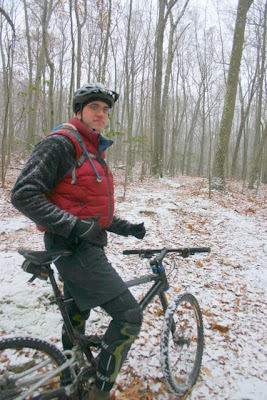 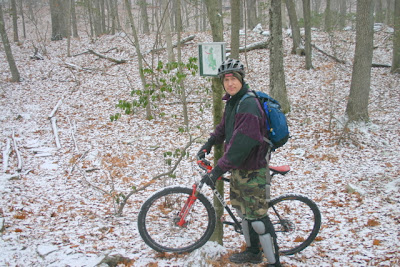 By the one hour mark I figured we should start heading back so we turned onto a trail that I knew would take us back to the White Trail and we could ride back to Jump Hill. Once back on the White trail we road back up to the intersection with the red when Woody, Dave and Rich caught up with us. 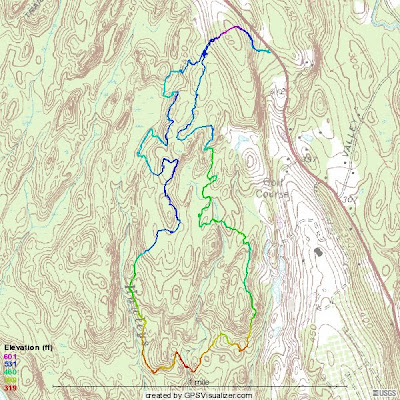