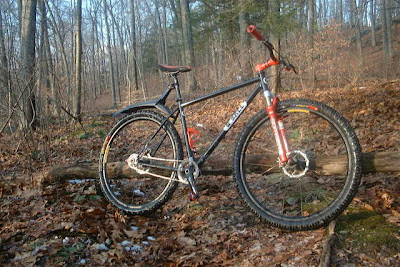 My last ride of 2007 was your basic Upper Paugussett State Forest Polly Brody to my new trail loop for a total of 5 miles. Had to finish the year on the Qball and as you can see I learned my lesson from the other day by putting on the rear fender and it was godsend! Could have used something upfront, too, which I have but I just didn't have the time to take it off the Fixation. In fact, I should probably get another for the 'Horse. The best thing to do is see if I can just get another adapter or two and then I can switch the front fender to which ever bike I am riding. 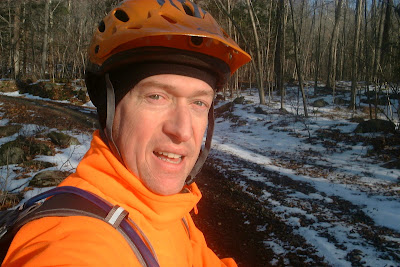 Had a bit of another Nor'easter last night that put a nice mix of snow and ice on the ground totaling about an inch. The prediction was up to eight inches and if that were the case I would have went XC skiing this morning rather than mountain biking. Still by 1:30 PM with the wind blowing it was chilly, to say the least.

To combat the windy conditions I wore my new Columbia Howling Wind Jacket and it was toasty warm. I think the perfect combination with that jacket, when it's above 30 degrees is just one layer underneath of either a turtle neck or long sleeve T-shirt. I had a long sleeve T and a short sleeve T on underneath and I hadn't gone but a quarter mile up the Polly Brody when I had to open zip pits because I was already too hot.

The micro fleece ear band that Santa gave me for Christmas was perfect and my neoprene socks of course always do the trick in the feet department. I skipped tights and wore a pair winter weight BDU pants, and of course my C'dale winter gloves. 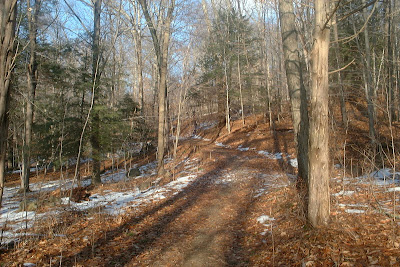 I was able to climb the Polly Brody in most places except on the first climb by the old rusted out Jalopy because the snow was too deep and then the steepest part, the leaves were way too slippery. On the back side, though, there was more snow and at slower speeds I felt I was on a ski bike rather than a mountain bike. When I got a little momentum going, though, it seem to help somewhat, in fact it might have been better than the 'Horse in the snow. Of course, a Surly Pugsley would have been really nice here, as well. I don't think it's in the cards to get one in 2008.

There was an ATV track in the snow, from the last snow, that I had noticed right after that storm. I wish the DEP would lay some logs or rocks near the gate across from Silver City to make it harder for the bastard(s) to get in. I know, I know, they'll just find another way in but why make it so easy? I hate to say this but having that ATV track through the snow actually made sections in which there was more snow actually ride-able. None-the-less, there should be no ATVs. I wonder if the owner lives on Bramble Trail? Saw some ATV tracks between the last house on Bramble and Hanover. 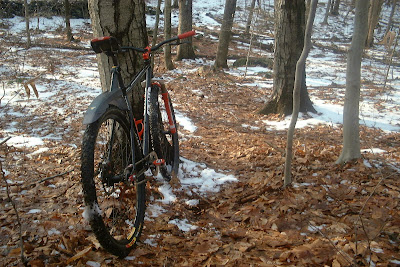 There was a hunter parked in the Echo Valley lot. I met this guy before, he drives a black El Camino and I think he told me that he hunts mainly on the west side of the forest along the blue trail. Good thing I was wearing blaze orange!

The shot above of the Qball is heading towards the right-of-way trail aka the new section of my trail and wouldn't you know it, I had another mechanical! I thought I fixed my rear brake issue where the cable was coming out of the lever but obviously I didn't. Gotta love the Avid Speed Dials, though, because after tightening one end of the cable at the caliper I was able to make some fine tune adjustments on the lever which solved the problem. 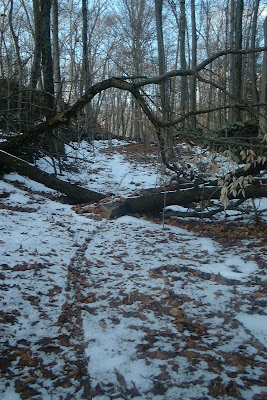 The Tunnel of Love was pristine, not even a hunter had been through it and I cleaned it's clock like it was butter. Still, making that hard right is still a tough maneuver and something that I wouldn't even try in the with snow on it. Still, the Qball rolled it perfectly.

Also of note, while riding back on Sanford road, there were a lot of pink engineer tapes lining what could be the start of a new trail? My guess it's hunters but it follows the forest boundary and could be interesting to investigate further.

As the for coming new year, I am going to focus on riding more trail miles. I did achieve a new milestone this year of breaking the 500 miles of trail riding this year and continue to shoot for 1000 miles but it will be tough. In addition to trail riding, my road riding/commuting goal for 2008 is ride a 1000 miles. It means I have to ride to work at least once a week for 10 months. That gives me a little cushion during the winter months, however, I have most of the cold weather gear that I need (except Booties!) so unless there is snow on the roads or subzero temps I am going to try it.

And of course, the bike project for this year is to take my old Fuji Royale from College and turn it into a commuting/touring bike, which cyclecross touches. Of course if I can get my hands on a 59cm Fetish Position, then I may forgo that project altogether but I doubt that will happen. Still, I will continue to troll the 'bay to see if something pops up.