Rube Goldberg, eat your heart out!

Here is the latest update to my commuter. Still pushing a 32:13 gear ratio, but I have added a few things, like fenders, a mirror, a RockShock Jett fork, a new stem that lifts up the handlebars a good three inches and a rechargeable headlight. 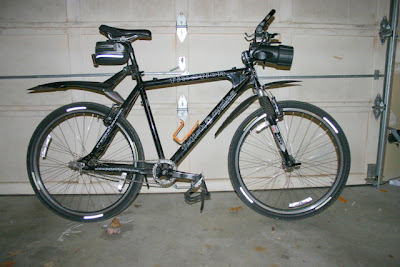 The RS Jett is nice because it probably has somewhere between 30 and 60 mm of travel and is still quite stiff. It smooths out the ride on the bumpiest of roads and makes taking the speed bumps in the office park at higher speeds really fun. 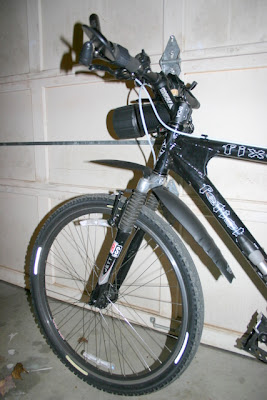 The profile design stem puts the bars in a nice position. Before, I was using the Misphit Psycles stem that only had 5 degree rise. It worked fine with the Qstick fork because the extra crown height brought the bars up to a nice riding configuration. When I went to the Jett, the front end dropped considerably, so I needed a stem with an increased rise. Wait till you see what I did with the Qstick fork! 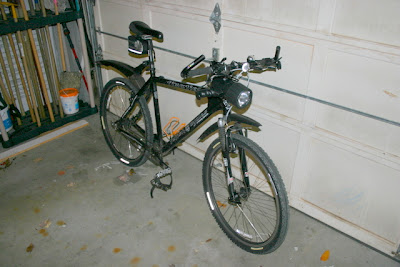 Using a one inch U bolt, which fit nicely over the bars once I provided some padding so it wouldn't slip, I mounted the U-bolt to a bottle cage in which the light fits in very snuggly. I had to create a half inch spacer between the bar and the bottom of the bottle cage so that only a minimal amount of the thread were exposed on the underside of the cage. The spacer, made of wood, also helps hold the whole thing in one place because the wood compresses against the bar when I tightened the bolts. I don't think I have ever fully changed the light. Right now, I get about an hour out of it, but that is all I need.

Total build cost: $22, compared to the $100 to $500 light sets you can buy, this worked out great, but it's a temporary solution until I can afford a real light set, like the Light & Motion Solo Logic, that maybe Santa Claus will put in my stocking this year. Let's hope. 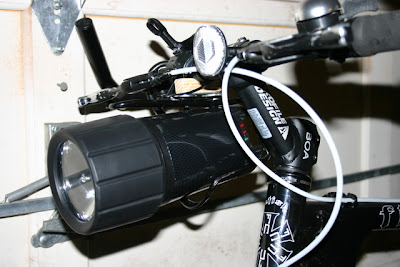 As for the ride, I have found the ideal route that minimizes exposure to Route 25 and still gives me 10 mile ride in total. Of course riding when is 32 degrees out in the morning presents other challenges, like keeping the feet, hands, and face warm enough. Already have started riding with a face mask, over gloves (but I probably needs some lobster mits) and neoprene socks (I am going to give galoshes a try, though). My old Army PT uniform works great for the outer wear.

Here is the best route: 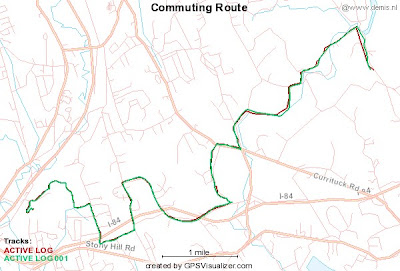