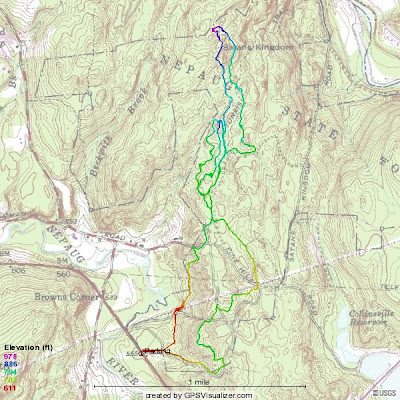 Drove up New Hartford, CT this morning with my friend Rich. Originally, some of the boys from Crankfire were planning on a ride at 10 AM but pushed it back to 11 AM because they thought they should give the trails an extra hour to drain before THEY got there. Frankly, an extra hour didn't make any difference. It was pretty dry to begin with. It has been so dry lately that the ground just soaks up the rain.

Parking is right along Route 202 but there is a parking lot inside the forest but it's kind of crazy in there and not really a lot per say, rather parking in and amongst the trees. As Rich and I were putting our gear on and getting ready this crew of people show up from Massachusetts with a bunch of downhill rigs. I asked them if they wouldn't mind us tagging along because we didn't know the area and they said sure but they warned us that they were pretty slow. They also said that Nepaug is sort of famous for big climbs.

We started off on the access road, which lead to a 4x4 road and then eventually got onto to some nice single track. The 'Horse was definitely in its element and I was finally getting the hang of adjusting the front fork for climbing by dampening the suspension and then letting it all hang out for going downhill. The top of this single track opened into a downhill trail with a lot of jumps along the way. In fact, I saw a video last summer of someone riding this very course.

That was a bit of a short run and then we were back out on some more 4x4 road and then once again on some more single track that led to another downhill run and that was pretty much the rest of the ride. Climb up to another big run with lots of jumps. After awhile, as the confidence in my riding abilities started to climb, I first tried rolling a few, then I hucked some small ones, and then finally road a few for real. It was a blast. Finally got to see some of the legendary stuntry, like the Flight Simulator and Penis Envy. Those stunts are way out of my league.
at 3:39 AM