Took the 'Horse to Mianus 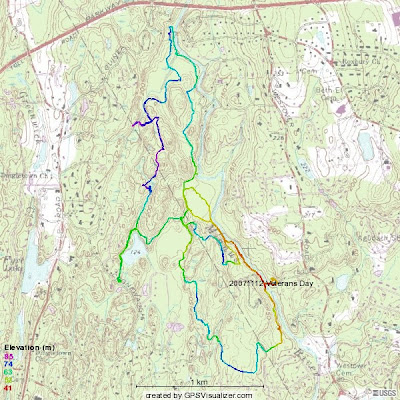 I don't think I have had Veterans Day off from work since I got off active duty from the Army so in honor of Veteran's day, Tren and I hit up Mianus River Park. I know, I know, there are all sorts of euphemisms for Mianus, especially when the trail conditions are wet and muddy. Only today the conditions were dry and pretty leafy, which actually made it slippery.

Tried some new stuff, rode some old stuff, did some stunts and all in all had a pretty good XC fest. Rode the River Trail that Friends of Mianus River Park built on the Tree Tops property that the State acquired a few years ago. Thanks to those salamanders and vernal pools this adjacent section of the park is now for ever preserved as openspace. Gott Sei Dank!

I think this trail is probably the newest trail in the park and its pretty good. Quite bit of little rocks to roll or huck along the way and it passes by Indian Rock, there is a witty little description of the terrain feature www.crankfire.com, a carved out bowl in a boulder.

We also ventured over to the parking lot in Greenwich off of Connewagh Road that I have never seen. Alot less parking there but there are some nice log rides, drops, and rollers worth hitting up along the way.

Following the new map that I had some input on and helped out with my GPS along the Swamp and Laurel Trails, we hit up alot of stuff that I have ridden before but always with someone else leading the way.

At one stream crossing on the Greenwich side, not sure what I was thinking, but trying to avoid the water, I rode the rocks to side, stalled and when down. Good thing I was wearing arm guards or it would have been bad, and while trying to avoid getting wet, boy did I get wet! Fortunately, since we were hammering, I never had a chance to get cold.

We did 8 miles altogether. Mianus is great little nugget tucked away within some pricey neighborhoods.
at 7:26 PM