Two more changes for the Qball, a red Salsa Moto stem and a red saddle. Got the stem from a guy on Craig's List and the saddle from riding buddy who bought it off another guy. Great saddle, has titanium rails. 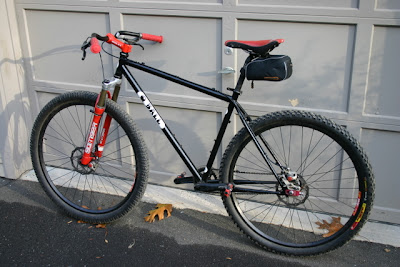 I got the Qball dressed up to ride in North Newtown this morning. Paula wanted to see the Burr Farm area that I posted on Crankfire so I agreed to lead a ride. She checked with her riding posse and found only one other take, Heather. So it was three of us, riding on a Saturday in the middle of hunting season. I usually don't ride on Saturdays because its hunting season, but I was still prepared with a blaze orange Henly that I got from Cabelas. It's really brite! 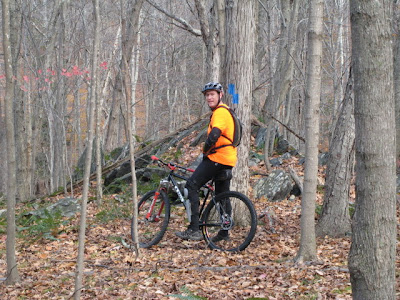 Riding up from the Pond Brook boat ramp, we headed up Pond Brook Road and turned into the old road right after crossing Pond Brook. Last time I was here the ground was pretty soft but I was amazed to find it so dry. There was no mud!

Started on the first loop going counter clockwise through the horse trails and I cleaned all the hills! Then we started the second loop which starts in Newtown and then moves into Brookfield which is part of the Burr Farm Open Space property.

Then started the second loop which is a series of downhill shots till you get to bench at Dingle Brook. We stopped and took a few pictures. 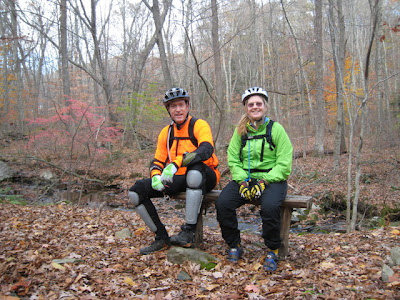 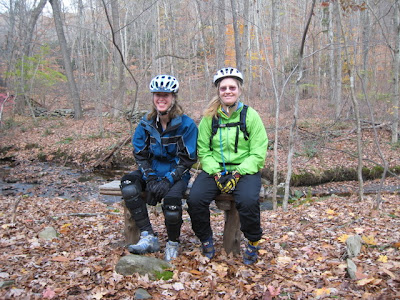 When we got back to the boat ramp, Paula wanted so more, so we headed off into Upper Paugussett State Forest where we encountered three different groups of hunters and it's shot gun season, now! One hunter I have run into before at the start of bow season last year. He was out showing his kids how to hunt with a 20 gauge, looking to pop a few squirrels but all the squirrels were actually over by the Polly Brody.

We took the connector trail to the old right of way that will be part of my new trail, if DEP ever approves it - its been six months now - and through the tunnel of love, which is an up and over I built from a bunch of trees that were knocked down when that tornado ripped through town last spring.

Then we hit the opening part of my new trail and I got to show off the Play Ground, in which the trail winds around many different kinds of exposed rocks that will make excellent rollers and drops in the future.

Dropped down onto the jeep trail that exits the Forest at Sanford Road and road home. 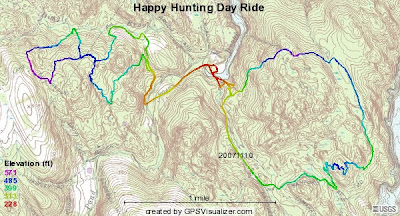