CT NEMBA's final ride of the 2007 season culminated at Collis P Huntington State Park the day after Thanksgiving on the day more commonly known as Black Friday. Instead of fighting the crowds to get the best price on an LCD HD TV, iPod, or toys for the kids, quite a few people turned out to burn off some of that Thanksgiving feast from the previous day. Also, this ride was a charity ride where everyone was asked to bring a can of food. The ride organizer, Paula Burton collected 14 cans of food.

There were some new people that I had never met or ridden with and then quite a few that I had. There was Heather La Palme (below), Tren Spence, a guy named Mark whom I never met before and his buddy Dave, Paul from Newtown, Bill, Ed Perten, Paula Burton of course, Vince Rinaldi, a friend of Tren's named Derek who actually lived nearby and was the only one wearing shorts that morning and of all things, bobby socks! Additionally, there was this guy whom I had always known as Calvinator at MTBR by the name of Kevin. I think there might have been others but I don't recall their names off hand. 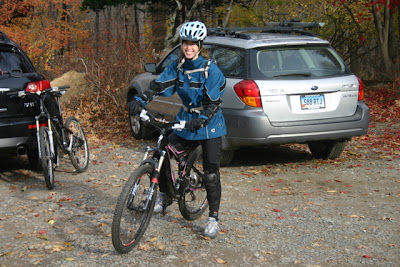 This is Paul from Newtown. 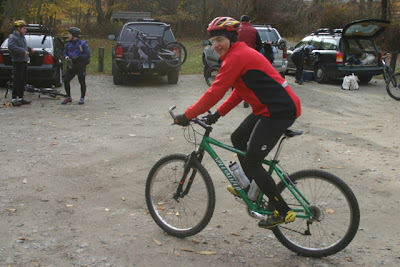 Below is the ride track from my GPS. This route, in terms of map distance comes out to be 14 miles, which is the longest, contiguous ride I have made on the 'Horse yet. Granted, I am not sure whether to believe that number or not because my Garmin Edge displayed 9.5 miles on screen. Never-the-less, three and half hours in the saddle makes for a long ride. The funny thing, though, is I am so comfortable riding my Iron Horse that I was ready for more after that. 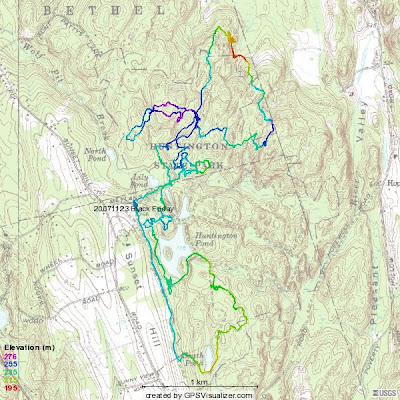 The ride started out at the D-Town lot (Dodgington) and we went down the main carriage road towards the Sunset Hill Lot (the one with the statues) but then turned down the blue trail, the one trail that I have never felt comfortable on, that is until I started riding the 'Horse. On the way there, I noticed that my right shifter was sticking and thought that it might be due to the thicker gloves that I was wearing because it was a cold morning. I think it was in the low 30s that morning.

The Blue Trail is best ridden in one direction, downwards! I think I might have climbed it once and probably spent more time hiking rather than biking. Going down the trail the first obstacle is stone wall in which you have to make a hard right turn. For the first time, I made it but swung out too wide, went off the trail, stopped short and did a slow motion superman over the bars (OTB). The ground was pretty soft but I was still glad I was wearing protection.

Further down, there are a series of water bars and log crossings that make the trail really fun to bomb down. Somewhere in the middle of this section there is a little rock garden that I found with right momentum you can just sail through. Then through another rock wall, only its a combo deal, where you ride a short roller and you have to huck it at the end or you may go OTB. Then, on the flat part of the trail, there is another nasty rock garden, a rooty, techy, gnarly steep down and then you are at the bottom. All in all, except for the little Endo after the first rock wall, I cleaned the whole thing!

Followed the blue trail to the glacial erratic where the new mapped singletrack starts and set off down that trail. What's a ride without mechanicals? Somebody in the group had a problem so we all stopped to lend a hand, some advice, or just wait to get rolling again. Kevin was having a front brake cable problem that required some zip ties to remedy. 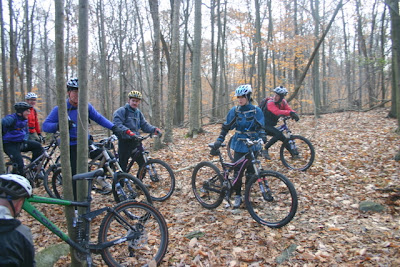 Ed Perten atop his brand new Stump Jumper dressed for a blizzard. 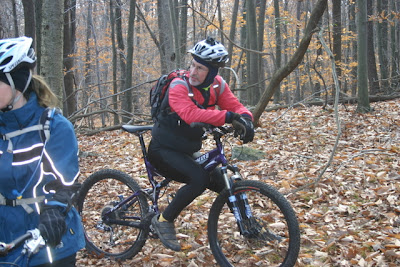 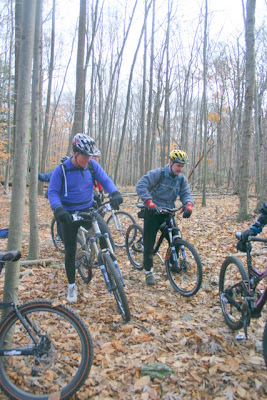 Tren on the left and Derek on the right. 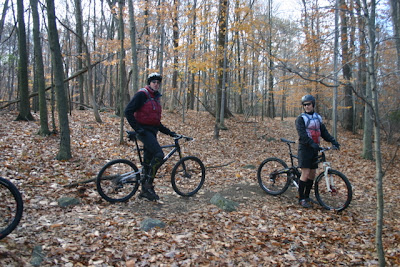 Followed the carriage roads to the start of Rock and Roll but I ended up playing sweep because I had to remove a layer, change gloves, and take off my knit cap. I was getting too hot. The Rock and Roll trail is probably the most challenging trail in the park because it twists and turns through a myriad of rock gardens, armored stream crossings, a cordory, a few bridges, and quite a few rock faces that can be rolled and/or dropped. Below, Bill is doing a rock climb. 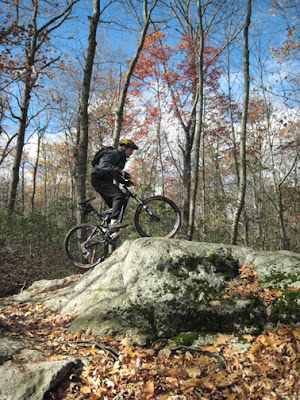 Here I am rolling a little rock face. 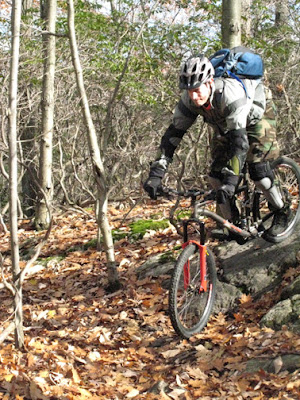 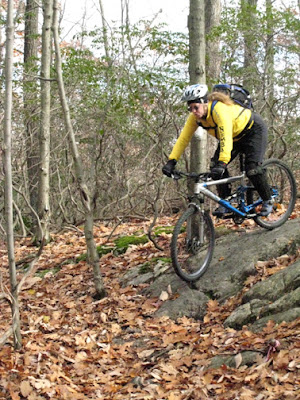 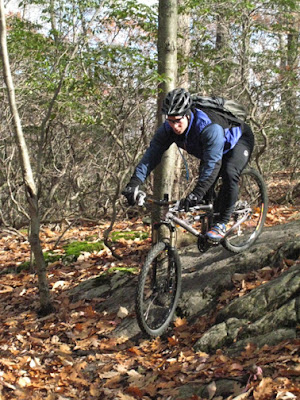 Heather got this great shot of Kevin dropping it on the tail end of Rock and Roll. 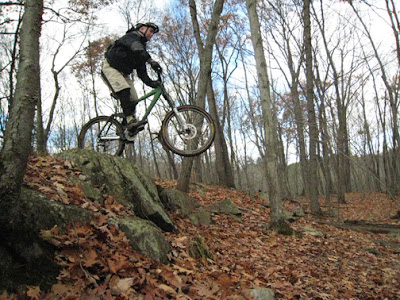 Then we headed over to the Big Burn, the twisty singletrack section past the seasonal Dodgingtown Lot. There are tons of rollers and drops interspersed throughout and area probably the size of four acres of land. There is one roller that I had never seen before and gave it a shot, and cleaned it easily. 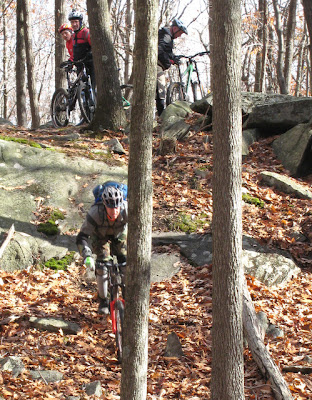 From here we hit the lollipop trail but instead of hitting the new bridges that were built this summer, some us wound up doing the figure eight loop, hitting the Ho Chi Mihn Bridge and popped back out on the Blue Trail. From there, we took some single track that Rich Stinchcomb and I rode a few weeks back in the reverse direction with the connector to Little Vomit. Continued up Little Vomit and wrapped around to the trail that goes into Newtown and eventually hooks back around to the Blue Trail. If you haven't guessed it by now, the blue trail basically runs around the entire circumference of the park. Along the way, we ran into Dave Plain and Tom Curruthers, who didn't quite make the 10 AM start time.
at 10:54 PM