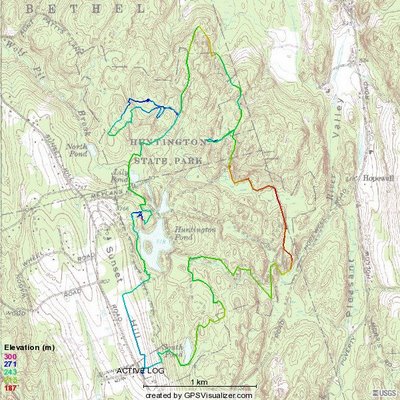 Wow, what a turn out we had! 50+ riders and we signed up 9 new members, too. Looks like my marketing efforts paid off because in the survey that I put out I saw responses that quite a few people saw the poster at their local LBS!

So, I rode for 8+ miles today and rode with 4 different groups of riders. It was really fun. Here is where I rode. Basically it was a combination of the Advanced and Intermediate rides and to tell the truth I am definitely in the intermediate category.

Started riding with Tom C and Dave P, two dudes that can really hammer! I was able to keep up with them most of the way until we got to Little Vomit, one of the really big hills in the park. They hammered the whole way up and I think I got about half way up, when I stalled out on a root and had to stop.

Looking on the map, you see the track that stops at the N in HUNTINGTON and that is where we met up with the Advanced ride led by Steve Herde and all the cats from Crankfire were on that ride. In fact where we stopped for a chitchat there was a downed tree and somebody must have ran over a yellow jacket nest because everyone was getting stung. Not me! (this time atleast). So, Tom and Dave decided to ride with them and I was just tagging along so cleaned up the rear. While bombing one of the nice singletrack downhill trails I went off a one footer and got some nice air! Woo Hoo! Freeride baby!

Got half way around the park and decided to do the Hero Loop, what I call the Lollipop. I rode part of this last winter with the Meatman but never completed the entire loop. There are quite a few really steep descents and some nice rollers. The Herdes were nice to wait up for me but they are in a class by the themselves. Midway through the loop I was bonkin, so I tried one of those Goo Packs and it had the consistency of jam. Slurped that down with lots of water and when I got off the loop I was feeling really good!

So, I lost the Herdes and found the Intermidate group with Ed, Steve, Joanna, Eric, and some new people and we did Rock and Roll and then took the grassy trail back to the parking lot. I like that route - much better than taking the carriage road to the end and then climbing that hill. It's kind of a slap in the face after good hard ride.

My track was 8.4 miles. Still can't get over how well the GPS works mounted to the stem. Need to create something a little more sturdy but what I have right now seems to work great. I will post up a picture of it sometime.
at 10:20 PM

Hello Friend! I just came across your blog and wanted to
drop you a note telling you how impressed I was with
the information you have posted here.
Keep up the great work, you are providing a great resource on the Internet here!
If you have a moment, please make a visit to my trinity matrix site.
Good luck in your endeavors!

Hey Mark!
That's awesome that you did 8 miles. I can't even imagine doing 8 miles at Hungtington.

Second, on the map where it says "Active Log" at that corner heading to the right, you rode that? We got near that trail but from the South Pond side and it seemed like steep hiking trail.

Awesome that you rode that.

I've been doing a 2.5 mile loop with my friend who I just got into riding. She's in better shape and keeps me motivated as I want to die on the hills.