Did a quick ride in Upper Paugussett SF this afternoon. I felt soo good today - I was hammering!

I one footed the up-and-over 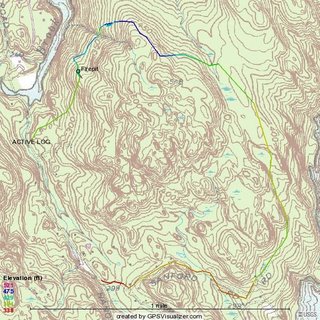 on the first downhill section on the Mullikin Trail and then decided to bail out on the lower section and head back to the Polly Brody.

Hadn't been this way in a while and it was looking nice but after the hike-a-bike on the blue tape I noticed a well made fire pit in the middle of the trail and it appears a tent was pitched, too. There was a towel within spitting distance that I dared not touch for fear of something untowardly upon it. Perhaps this was an overnight rendezvous for some teeny-boppers? Hunters perhaps trying to get the jump on the turkeys? What ever their intention, camping and fires are prohibited.

I dismanteled the firepit and used the rocks to create a nice up-and-over on the downed tree blocking the trail. If you are comming from the PB, you have to swing out wide to hit in straight on, which I did and cleared it on my first try. The ramp on the other side was little shaky so I made a few adjustments and was able to one foot it on the way back, too!

Another comment about riding this evening was the fact that satellite reception was awesome. Heavy tree cover through the whole ride and not a single dropped signal. As opposed to an earlier ride a couple of weeks ago in the morning before work, I wondered why I brought my GPS on that ride. I have to say, that satellite reception seems to be better in the afternoon, at least when you have heavy tree cover.