Returned to West Rocks for another ride. There were a mixed bag of riders from both Bikerag.com and Crankfire.com. The Big Game, Sarahbean, 9.8 m/s/s, and yours truly. Plan was to get to the ridge and meet up with 9.8. So about a quarter mile in we come to a hornet's nest hanging low over the trail. 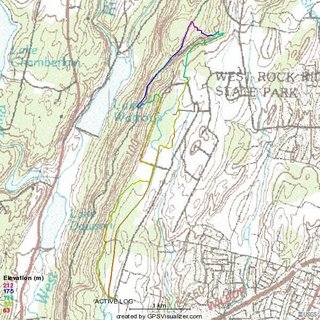 TBG aggravates the next and I try to ride past only to find that I am now the object of the wasps affection . After two or three stings I was OTB. Jumped back on and tried to get away but they kept coming after me. Got a total of 7 stings. Ouch. Then, further down the trail, I tried to ride a plank over a stream and I cleared it, only I should have went to the left but ended up going right and my front tire got stuck in some roots and once again, OTB!
The true irony however was in the fact that I had such a great ride on Wednesday without armour that I was pretty cocky and decided not ride with the armour as well. That was a bad move. Knees, shins, and forearms got pretty scraped up.
Despite the scratches and bumps it was a great ride. I was able to clear the rock pile on the first go that I choked on last time. Didn't get over the log jam, this time, but I was close - again. Rode some new trail, including 9.8's private stock down hill which really wasn't a downhill where you can fly rather a series of rollers and drops along the way to steep stuff. Overall, a great ride and can't wait to return to this place again.