Mianus River Park, brings back memories. Long before I became a mountain biker, I was on the Board of Directors for the Mianus Chapter of Trout Unlimited and of course our namesake meant we were quite involved with the Mianus River and especially this park, and one of the things back then (mid 90's) we were vehemently opposed to in the park was of course, Mountain Biking. However, all that animosity has been put by the wayside thanks to Paula Burton and CT NEMBA. Apparently NEMBA has done quite a bit of Trail Maintenance there starting in 2002 and has gotten TU involved, too. Kind of ironic.

Well, the day started out with one big worry after yesterday's little problem with my rear derailuer but I was able to get it fixed, between meetings today, by Brian at Hickory and Tweed in Armonk Village. Ironically, Brian said that he was probably going to be riding Mianus and sure enough we ran into him. Brian rode with us for most the time out and like Alex, Brian can hammer.

Mianus is an intense place to ride with a ton of variety in the trails. You can ride flats (river valley, duh) or you climb hills. On the sides of the valley the trails tend to be gnarly rooty and really techy and there hucking opportunities all over the place. Nice little ones right in the middle of trail to 3/4/5+ rocks surrounding the trails. Trails are maintained well, too. Bunch of fishermen that spoke to in the parking lot complained that the trails were really getting worn down but I didn't see that. From their purview, I think they were speaking of the trails that get them to the river. Trails that lead away from the river are nicely maintained and well marked.

So, of course I uploaded my track file into SportTracks and found in the latest version you can export the map so here it is below. 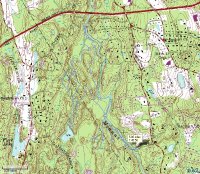 The track is pretty good as it lies on the map. Also what I like is it shows you the direction of travel and a little flag at the start of the ride, the distance and time of the ride. This is a great program. Of course what would make it even better is if it showed elevations in colors like GPSVisualizer does. Another thing that I don't like about the export map is that the track is hard to see on the map. It looks better in the software but not by much. What would be helpful is if you had the ability to change the color of the track and you could vary the map's opacity so that the track stood out. Might have to suggest this improvement to SportTracks along with asking why it won't read my GPS.

And here is the same track shown in GPS visualizer. Obviously, each program has its strengths and weaknesses. GPS Visualizer lets you also display multiple tracks, as you probably have seen in my earlier posts, and waypoints. So from a mapping perspective, GPS Visualizer is much more handier. 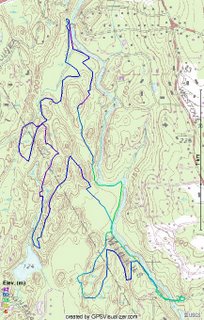 Let me know what you think is more helpful, GPS Visualizer vs SportTracks.

[Post Ridem Report]This is the first time I have ridden two days back to back and my legs are screamin'!
at 12:55 AM