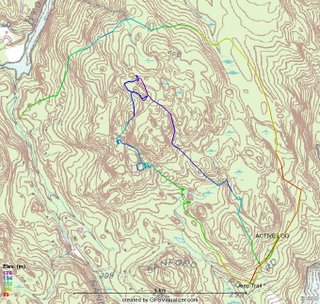 The nice weather is finally upon us. Saturday was beeeeeautiful but then the afternoon rain front cooled things down a bit.

On Saturday morning I met Cindy and Paula and with their dogs, we walked NBLA's trail in the Upper Paugussett. Quite a walk - first time for me to be hiking in quite a long time and of course got blisters. We walked from the parking area off Echo Valley, down to Sanford Road, and picked up the trail. NBLA's trail presents quite a few problems. Primarily, quite a bit of the trail goes atop Blue Blazed trail belonging to CFPA. As you can see on the map (left), the left most track (westerly trail) is their proposed trail and what it does is breaks off and heads northeast, which doesn't really make a whole lot of sense if you are starting at Pond Brook, and according to Cindy, the stone rip-rap on the Polly Brody is not good for the horse's hoves. So it looks like some more thought has to be put into this.

Since Paula left her car at Echo Valley and was going to walk back I suggested why don't we walk back on my ROW trail. This turned out to be hit! The big advantage is that it doesn't come into any contact with Blue Blazed trail. Of course there are two wet areas that we found really nice detours around and which really acentuate the trail by giving it more variety and throwing in some degrees of difficulty for climbing.

Saturday afternoon while playing with the kids and making a feeble attempt at cleaning up the garage I discoved that my front tire was flat. So I changed tubes and then couldn't get the tire back onto the rim! I tried everything and in the process broke a tire level. Finally, I got it back on. Later, after examining the innertube, I found the hole, and decided to check the tire to ensure there was nothing in it that could hurt the next tube. Ugggghhh, that meant taking the tire off. Well, I did and found nothing, and another broken tire level later and an hour of frustration, I finally succeeded.

Sunday, I met two guys from work at 8:30 AM (which was really 7:30 AM without Daylight Savings) for a ride a Huntington State Park. Last two rides this year at Huntington originated at Dodgingtown Road and today we met at Sunset Hill. These two guys were atleast 10 and 20 years older than me and they could hammer. The younger of the two, still older than me by 10 years never quit and hammered just about every hill. I was able to keep up with the older guy. The irony of course is when I ride with the guys from Crankfire.com, I am of course one of the oldest and SLOWEST. For this ride, I was the youngest and slowest.

Also, you will notice that the track to the left is all back, that is because I had a signal break and had to use USAPhotoMaps to connect the dots. Overall, it was a good ride, 6.45 miles in 2 hours and 30 minutes. Did a few rollers and got some nice air on one of the wide open trails where we were hammering down a slight incline and I launched off a rock protruding out from the middle of the trail. It was the same feeling as skiing!


So, I am thinking about whether I should get a different shock for my rear. I saw on MTBR.com, on an AC thread that it appears that some of the older model ACs, the rocker arm had three positions, where mine only has two, 6.6" and 5.3". I am running with 5.3" of rear travel now and I can climb, but could I climb better if I had less travel? Does it make sense to get a better shock that will automatically dampen the coil when it senses bobbing up and down or do I try to get an older model rocker arm?
at 1:09 AM