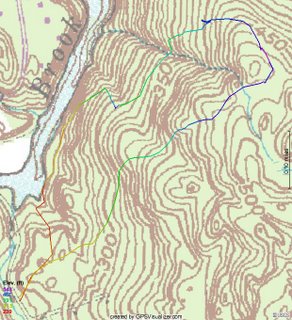 Weatherman said rain all weekend and heavy at times but maybe I heard the forecast wrong because it was certainly wet on Saturday but not that bad. So in the afternoon I went out on what should have been a short jaunt but ended up taking an hour and thirty. Got sidetracked on the Up and Over. I think I got it figured out - logs on the high side make a ramp up and rocks on the low side for the ramp down. Next ride, I am going to give it a show when I have some armor on.

Rather than head down to the Drop Zone, I found where "the road" turns almost due north and heads downhill and then turns west again. Pretty overgrown but doable. After it turns west it becomes a nice trail/road that is rideable both up and down. Still needs a little more work - don't want a branch in the eye. 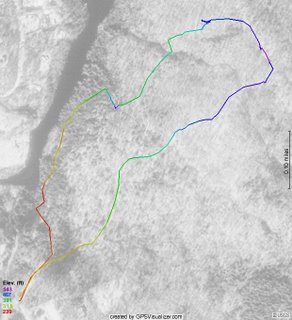 One thing I noticed is that where it hits Al's trail, it actually crosses and heads down to the river. I might try to continue through there next time only because I really don't like encountering walkers and hikers on Al's Trail. I think I use most of it still it hits Pond Brook where I think it went to a ford and then cut back up, take a little of Al's trail and then cut out using the Equestrian right of way back up to the Polly Brody.

Here is the aerial. Kind of looks better. What would be nice is if you could get an aerial/topo overlay. It did rain like the Dickens on Sunday though.
at 1:42 AM