Scotty D is officially back with Riding Club Ilumenati and couldn't have picked a better ride for his come back tour. Originally, I had suggested a Key Party Route (watch the movie Ice Storm) because Pete needed a ride closer to home but then he checked with his mother and she said she would love to have us stop by so that was settled. Also, we needed to get a picture with her this time. She even said something about it. 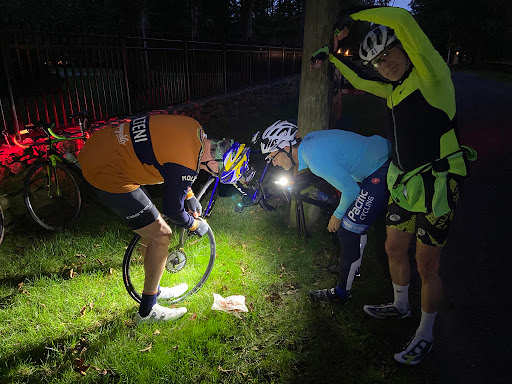 Last time we rode from the Rt 7 Commuter Lot, we rode clockwise to Ridgefield and finished on the Norwalk River Valley Trail. On today's ride, we rode counter clockwise, starting on the NRVT but didn't take it the end, rather worked our way to Sturges Ridge and it was there that Pete realized his front tire was flat and we had to replace the tube. 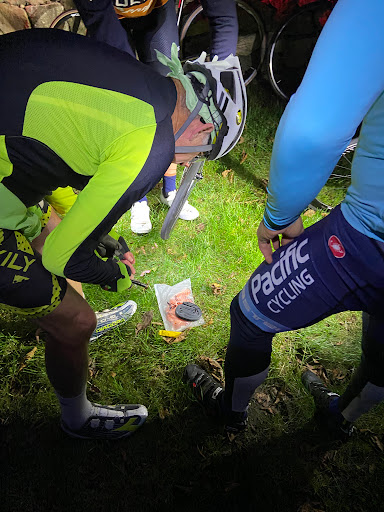 This is why, when you ride at night, having a helmet light is essential. Pete had everything in his seat pack except a spare tube and levers, and he wasn't carrying a pump either. If he was riding alone it would have an Uber of Shame for sure. 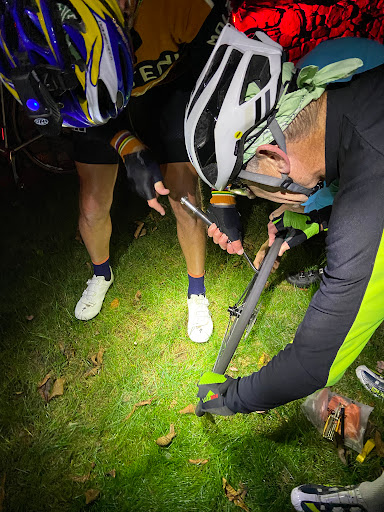 John K saved the day, having extra tubes and CO2 but Matt O was able to pump up the tire enough with his hand pump to get Pete rolling again. 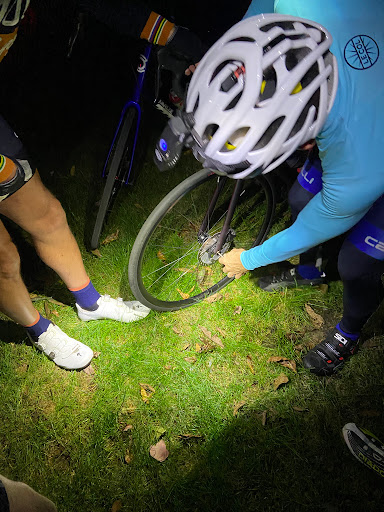 Hopefully, Pete will take this as a learning experience and be better prepared next time.
After the tube change we rode down Honey Hill and got stopped by Metro North. From here, we crossed over Route 7 and hit the first climb of the ride, Scribbner Hill.  Every road on the westside of the Norwalk River Valley that goes up the ridge is pretty much a tough climb. 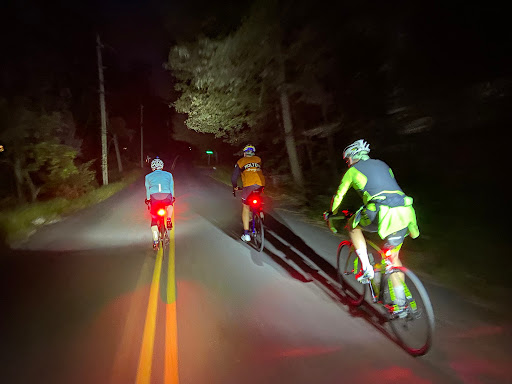 On this ride, we stayed off the Ridgefield Rail Trail because we really shouldn't ride it and also because I wanted to increase my Wandrer mileage total. Crossing over Route 102, began probably the toughest climb of the ride that included Cooper Hill, Florida Hill and Ivy Hill. Then there was climb behind Pete's Mom's house that was pretty brutal as well. Interestingly, according to the ClimbPro, it was the last climb of the ride and even with the stop was almost 2 miles long.
Pete's Mom's house, ironically was the halfway point on the route. We thanked her for the cider donuts and Keebler Fudge Striped cookies and started riding again. Her garage was warm but when we got outside the temperature was a shock, a cool 53 degrees according to my Garmin. We picked our way through Western Ridgefield and stopped at border with New York for a little break. 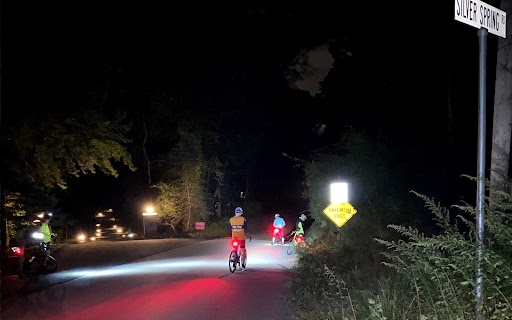 Rode the dirt road through Lewisboro and then cut back into Wilton and then into New Canaan.  We rode down Valley Road into Silvermine and then back up into Wilton again and finally down to the bottom of Wolfpit Road via Range Road.  By the time we got back everyone was freezing and didn't want to hang out, rather hop in their cars and turn on the heat. That's what I did.
at 11:30 PM