I met Will in Hillsdale, NY Saturday morning around 10 AM and we headed out on a route that I planned out on Ride with GPS called the Roe Jan Loop. the night before. There is a new brewery off of Route 22 in Hillsdale called Roe Jan Brewing that I visited last month and realized it would be the ideal jump off point for either a road or gravel ride. 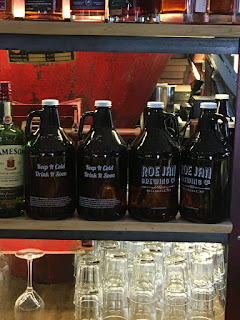 Due to the COVID-19 Pandemic, brewery was closed so all I could do was park in front of it. I had thought after the ride with Will I might take a spin down the section of the Harlem Valley Rail Trail that terminates at the brewery.

We had to climb the Taconics, just north of the Catamount Ski area. I was wearing my new winter cycling sweater that I bought in Wyoming two weeks ago but I couldn't show it off because it was too cold and I needed a cycling jacket. 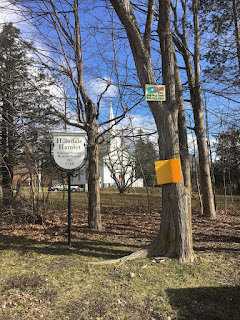 Then ride down Route 41 to Salisbury, which has to be one of the best roads to ride in Southern New England. While really sunny the north wind made it a lot colder and during half the ride it was out our backs but turning north in Salisbury it was head on and slowed our pace immensely.

When we got to Salisbury we stopped at the spring to refill bottles and have a snack. I brought some LaylaBars, that a friend of mine down in Philadelphia started making and had my first taste. It was just what I needed. It's a mix of jams, nuts, and fruit bits all rolled up into a compact size that is gone in two bites.  Of course if you were pedaling you could fit the whole thing in mouth easily. 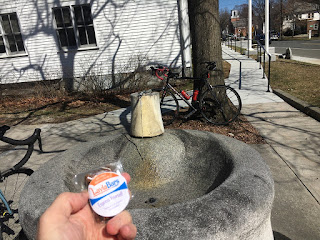 From Salisbury, out route took us to Lakeville and around Wononskopomuc Lake and then over to Millerton, NY, which on any normal Saturday is usually crowded with people because it's also the terminus of the first leg of the Harlem Valley Rail Tail. Today, it was a ghost town. From Millerton, we headed down Route 22 to Route 199 to begin the third climb of the route towards Ancram.


Climbing up State Highway 199 I noticed the old railroad bed that parallels the road and at this sign is where it crosses the road. I have always wanted to see this bed after reading about it.  You can see the raised portion of the roadbed along Rt 22 just outside of Millerton, heading south.  After about a mile on Rt 199 you can see the roadbed again on your right. After crossing at the road you get a great view of the road bed again running along the northeast edge of the ridge. 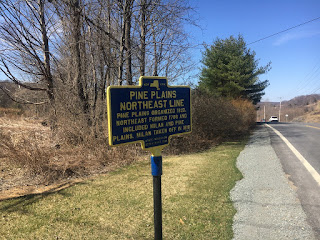 At the top of the sixth and last climb of the ride Will and I stopped for a snack. We now had 8 miles to go till we got back to Hillsdale.  Two miles down the road, while trying to down shift for the next rise a head of us something snapped in my right hand shifter and I reached down to check the cable only to find it totally slack.  Guess I was riding a dinglespeed back to the car and no happy ending for this ride but a great ride and route none-the-less.