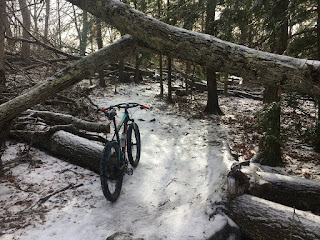 I entered the forest at Echo Valley and found the conditions to be quite good.  The snow squalls from the other day made the trails really grippy and a pleasure to ride. There were a few icy patches here and there but it wasn't till I got to the Tunnel of Love (the section of trail I bermed last summer) did the conditions change drastically. This section was all ice and it was almost impossible to even walk. 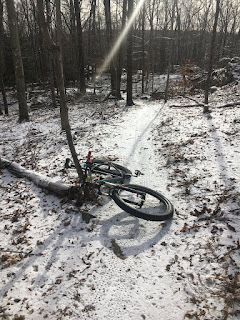 After that icy section the trail was great again and I was having a blast cruising down the trail with snow crunching beneath my wheels. 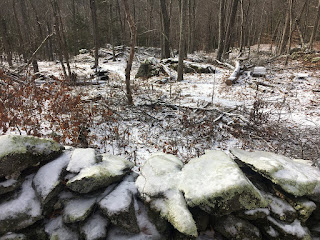 There was, however, much more ice on the southern section of the forest, ironically, the area that got more sunlight. 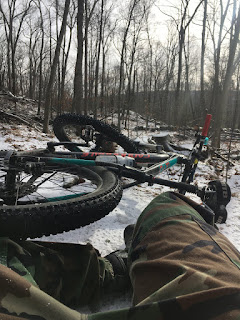 Just past the rock wall with the big up and over I tried to cut from one side of the trail to the other and head onto a wider turn when I my bike slipped out from under me. Boy, did that hurt! 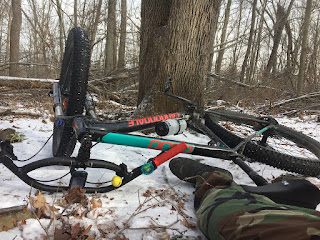 On the way back towards the Poly Brody Forest Road on the unsanctioned trail I had just gotten through the Big Muddy when I hit an icy root that made my bike, again slip out from under me.  That's going to hurt! 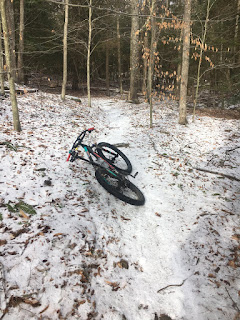 I did a lollipop loop on a branch of the new Mulikin Trail and then headed back to the Gussy and then down the Horse Trail (yellow splotched blazes).  Just as I turned onto the white trail to begin my descent back to the forest road the bike slipped out from under me and this time I went OTB. That fall hurt the most.