I set off Saturday, June 27th, to ride what I call the Tr-bury Gravel Grinder which consists of the Larkin Bridle Trail, Middlebury Trolley Trail and the Woodbury Trolley Trail (the last two are the same road bed, just different towns) only I went about it in reverse and I wanted to scope out the route for a ride that I would be leading next day for the LOF Adaptive Waterskiing group. 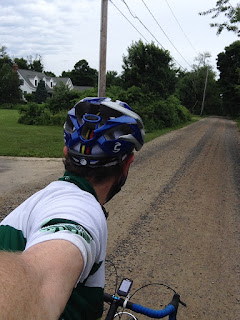 I headed up Purchase Brook to get in some gravel on Peach Orchard and then head down West Flag Swamp.  I really love riding these two roads and like to ride them in both directions now. 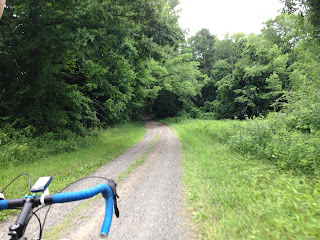 West Flag Swamp is just a gravel road with nothing on it.  There are no houses but there could be some trails coming off it but it's a great gravel road and the decent after Mallory is insane. 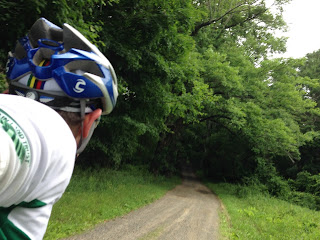 After riding the section of road that I would be leading the ride on I headed over to Middle Quarter Road in Woodbury to ride up the Woodbury Trolley Trail only to find the entrance really overgrown and lots of poison ivy everywhere.  I blasted through and then stopped further in and sprayed water on my legs just in case. 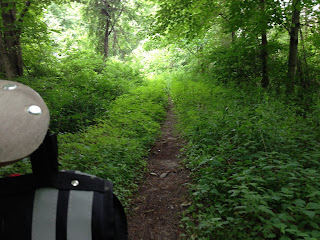 It would appear that this trail isn't seeing much use and that's too bad because it's cool to ride a piece of history, in which passenger and freight trolleys moved up and down this line over a hundred years ago. 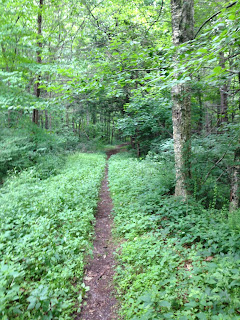 This right of way is truly a diamond in the rough. 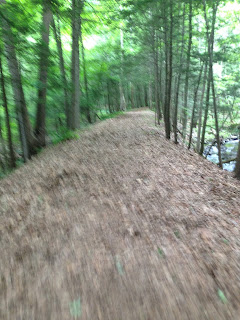 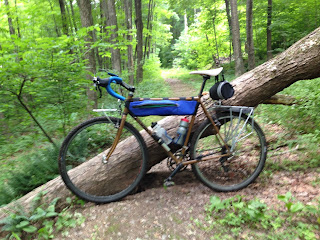 After the climb, the bed turns to the north at the old Woodbury Reservoir but there are quite a few trees down along the way. 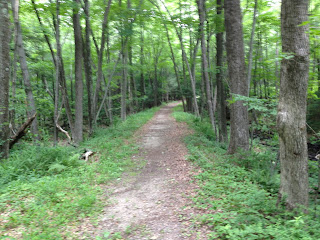 I got on Rt 64 and passed by the sign.
That had to have been a hard name to grow up with. 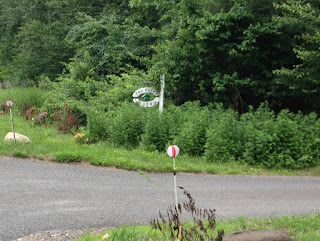 Riding through Middlebury, I basically stayed off the trolley trail except to get around the traffic light at Rt 188 because there were too many walkers on the trail and eventually I got on the Larkin Bridle Trail.  There, too, were a lot of walkers, runners and few bikers.  At one point there was a runner in the middle of the trail and gave warning that I was coming from behind but she had earbuds on and couldn't hear me.  It was hard getting past her and she was surprised when I passed but if you are going to tune out the world on a public trail don't be surprised if something like that happens again! 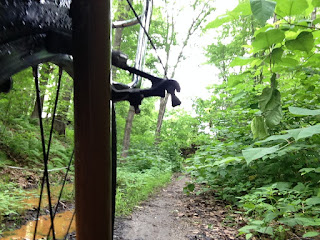 The wet part at Towantic Road is still pretty awful but what a lot of people down't realize is that if just ride down the center of the trail you will avoid the mud.  There's no way avoiding the water but the middle of the trail is the hardest and you won't sink. 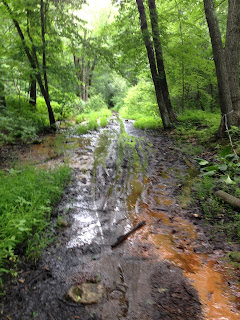 Thinking that I was short on time because my daughter said she wanted to go hiking in the afternoon once I hit Rt 67 I by passed the rest of the trail and rode straight home. 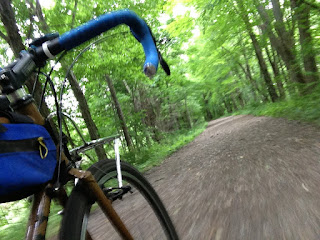 Upon arrival, turns out she was still sleeping have not slept at her sleepover from the night before so I got to enjoy my 8 Barrel IPA from Chatham Brewing.  It was well worth the wait! 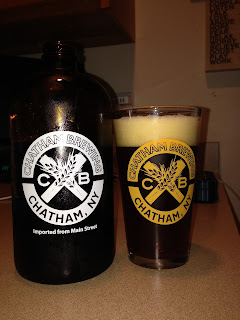