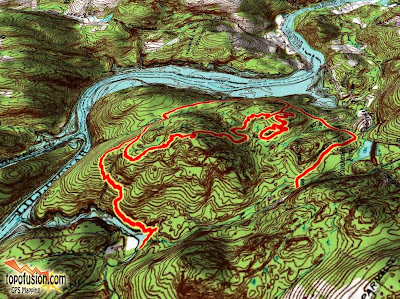 It's been almost thirty days since I last sat atop a mountain bike saddle and rode singletrack.  I wish I could have gotten out on Saturday or Sunday when it was much warmer.  Too many family activities Saturday and Sunday I took the family skiing, so I braved the much colder temperatures and headed out to Upper Paugussett State Forest.  Now that I think about it the last time I rode here was on Christmas Eve!  After that, we got some snow that I wanted to take advantage of with other activities. 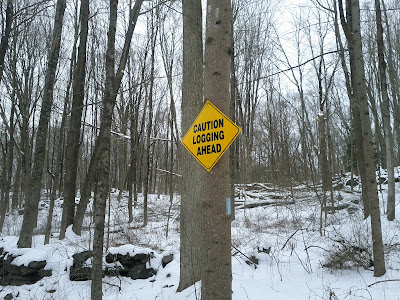 The last time I was on this side of the forest I was snowshoeing between the Gussy and the Poly Brody I noticed this sign at the parking lot but never got to see what was up until today.  Jerry Milne, the State Forester whom I met with a couple of weeks ago to survey my proposal for making the Mulikin Trail legitimate, said that they were going to be logging in this neck of the woods to improving the sugaring.  I met up with the two loggers, who are twin brothers and they had done a pretty good job of clearing things.  I stopped and chatted with them a bit and pointed out a few downed trees that would be nice if they removed so I could reroute the blue trail later down the road. 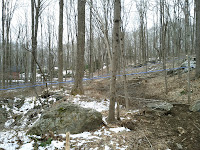 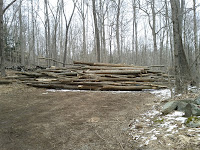 The loggers told me they were working the whole weekend and saw many bikes and I new that wouldn't be good for the less sustainable trails in the forest. 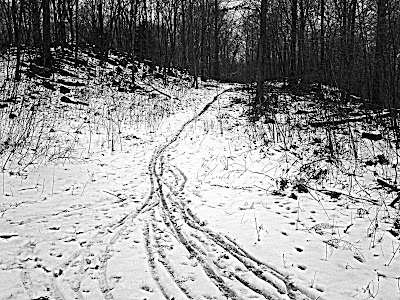 I saw one or two tracks heading down the white trail towards the Kissing Oaks but there were many tire tracks heading to and from the Mulikin (above) that I knew wouldn't be good because the ground on Saturday and Sunday never got below freezing and as I would later find was an absolute mess.  If you are reading this post and frequently ride Upper Paugussett, please try to stay off the Mulikin because it's just too soft to be riding it right now and too wet during the winter for that matter.  I have plans this spring to make some big changes to the Mulikin that will make it a better experience as well as much more sustainable. 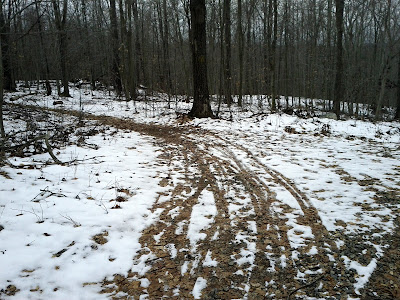 The Gussy, on the other hand, is one of the more sustainable trails in the forest and as you can see quite a few riders rode it over the weekend.  My snowshoe tracks were completely obliterated. 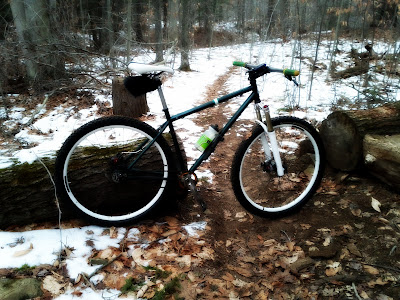 Of course, stopping for a good bike porn shot was called for at the intersection with the Yellow Horse trail.  In fact there is a pretty good chance this section of the trail will be changing for the better this spring as well because I am going to shift eastwards so that it's closer to the drop off that you may noticed at one point.  The terrain through there is much more interesting and it will make riding through there really fun.  This reroute serves two purposes, it will move the trail away from a future logging operations staging area and connect directly to the new and improved Mulikin Trail. 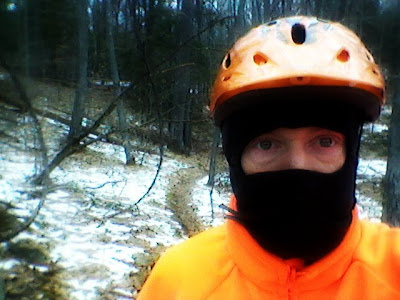 It was freaking cold today.  The Garmin said the temperature was 24 degrees!  I rode with a balaclava the whole time but ironically, underneath my windstopper, fleece hunting jacket all I had on was a longsleeved riding shirt.  That jacket is so warm that to wear anything else underneath turns into a sweat lodge.  I could have used some shorts over my tights because my rump and hips were ice cold when I got home.  Otherwise, I was perfectly fine.  It's so much easier planning what to wear for the woods than it is for the road. 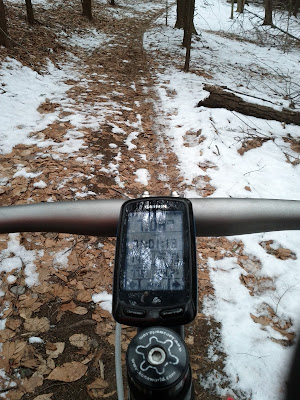 I am really loving the Garmin Edge 800 except for the maps and Auto Pause.  I figured out it was set for 3 mph so that is why some of my track appears weird in some places.  I have since then moved it a half mine and hour.