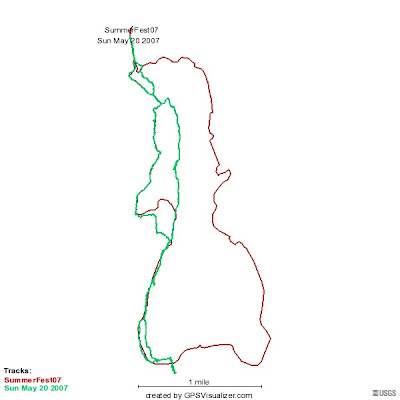 Looks like Terraserver is down, or they just changed their code and you can no longer get "free" maps from them. Any, I thought I would show the difference between what I had intended to ride and what I actually rode. Turns out the "Greenway" that the City of Danbury is still vasilating on whether to aquire or not is just an old road that goes between Tarrywile and Redding. It's largely used by Motocross and ATVers, which is all illegal of course. In fact, as we were riding up the road part two MXers came barreling down at at least at 40 Mph. Fortunately, we heard them before they go to us and we were able to get off the trail in time. All I can say is they are dangerous. I would also say that they are largely responsible for tearing up the trails. Too bad. It was dual track but there were sections where it was pretty bad.

There was an old road that ended in a swamp. I am sure 100 years ago that road went through, but no now. Guess that could be one of the stumbling blocks for the City to make a connector to the Terre Haute property. Still, it was a good ride. 9 miles. Tren was there and a guy from Crankfire who lives in the area showed up. I rode the Fixation in rigid 26er mode and it sucked. Never doing that again unless I have some supension upfront. Of course that is the plan once I get another crown race so I can switch forks easly.

Summer Fest was pretty much a bust. Nobody came for my Mountain Biking 101 class and the only thing that seemed to get the most attention was Geocaching.
at 7:46 AM