I have always been fascinated by trains and in my youth I would assemble elaborate and complicated train layouts. It started in the basement of our home in Wilton, and then when we moved to New Canaan, it was in the barn. Since the barn wasn't heated it was hard to enjoy my trains in the winter time. Then we moved across town, and there was no basement, so I built my next layout in a crawlspace off of my room which made playing with my trains in the summer time difficult as well, but no matter what the situation was, I was still able to enjoy my trains.

College, the Army, working and living in various places, I never had the space for that next layout I am always hoping to design and build, and when I finally bought a house that had a suitable basement, the kids came along which further prevented that next layout. So I had to find other ways to quench my thirst for trains. One way has been combining my favorite physical activity, mountain biking, and riding rail trails and old rail road beds that one day could be come rail trails. Rail trails and old railroad beds some times have tell tale signs of their past use, namely you will find discarded railroad ties, but the other cool thing about them is the structural engineering that went into building them. Reading and researching these old lines has become my new railroading hobby and then if the opportunity presents itself actually visiting the railroad bed and riding it on my bike. In a way, its like riding the train itself.

One such railroad bed that I have been fascinated with for the past 5 years after spending a week at Mt Snow in the fall as a get away from it all was an old railroad line that connected Wilmington, VT to a main line road called the Fitchburg Railroad, which back in the day you could eventually get to Boston or New York City, or Albany when railroad travel was the fastest way for long distance travel.

Five years ago, I read up on everything I could find about the Wilmington and Hoosac Railroad on a couple of websites. Then, six months ago we planned a family summer vacation back to Mount Snow and now that I have started mountain biking, I decided to look into the possibility of riding some of the old railroad beds. Only, now, I found a bevy of information, including a ride loop that includes a portion of the old railroad bed, which is called the Harriman Trail. This ride can be found on the New England Mountain Biking called the Whittingham to Wilmington and Back.

Mount Snow touts itself as the mountain biking riding mecca for the East Coast but what I really wanted to ride was the Harriman Trail but when you go on vacation and you need to tie up the car for half a day it presents all types of logistical challenges. So, I decided that I would ride from the Condo down to the trail head at Mountain Mills. Looking on the map and asking the day before at a local bike shop, I found the best way to get there was an 8 mile ride. That would be easier enough, I thought, but after a wrong turn which brought me into Wilmington, VT instead of bypassing it, the 8 mile ride turned into a 12 mile ride. Below, the color coded line shows the route that I actually road -- the different colors correspond to the altitude. The magenta line is the route I should have taken that would have saved me four miles of riding! 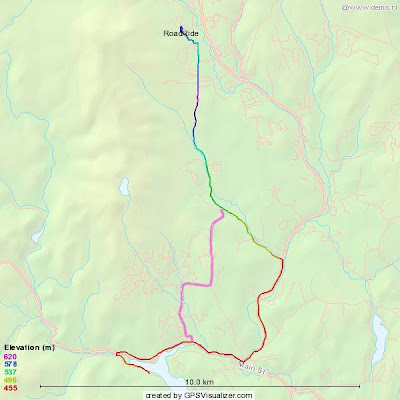 I could have planned some of my navigational equipment better, since I planned to hit a geocache along the way, I should have had my Garmin Map60 mounted on my bars, instead in a shoulder pouch. That way, I could have set up a route to follow and probably wouldn't have missed the turn that added 4 miles to my ride. Also, one thing I didn't realize is that the Mount Snow Valley has this bus system called the Moover, minibuses (not the Westport variety from 70's) that run between Mt Snow and Wilmington, and they have bike racks on the front! I could have planned on taking the Moover down to Wilmington, and do the loop prescribed on the NEMBA website. Next time, perhaps, and on my single speed 29er!

I left at 9 AM and got to Mountain Mills Recreation Area, the trail head. 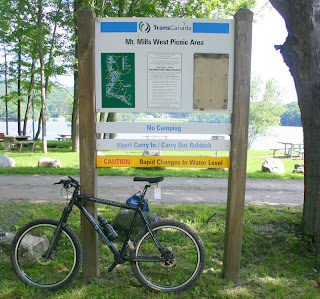 This trail, by the way, is part of the Catamount Cross Country Ski Trail Network. So, you will see these blue signs on trees along the way. 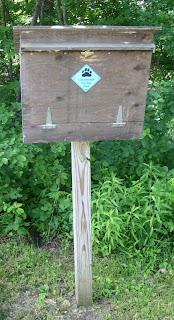 One word of caution: While there are the blue signs along the way, they are infrequent and not clear at trail junctions. It's easy to get disoriented and set off down the wrong trail only to come to dead end and a nasty climb back to the main trail.

Once past the gate, the trail starts to climb? What, a railroad bed that makes a noticeable climb? Well, it does and it came as a shock. I was expecting a nice easy, flat ride to the Harriman Dam and back and easy it was not. Apparently there had been quite a few washouts along the way but it seems the trail gnomes fixed that recently. A mile or two further in there is another gate, only this one is quite tough to get through. You have to scuttle through on the sides and carry your bike. I think it was originally intended to discourage off road traffic such as MX and ATVers but they found a go around.

One of the first of many confusing intersections is about a quarter of mile from this huge ridge cut. Right before the intersection is an earthen trestle that at one point was 50 or 60 feet above the existing ground elevation. 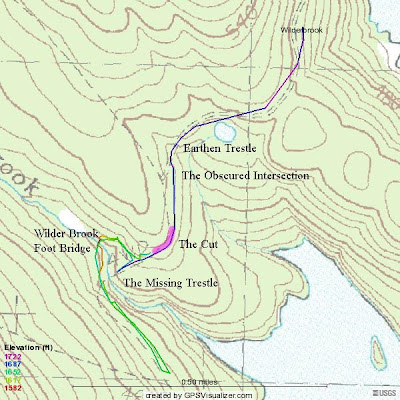 What makes it confusing is that there are no Catamount signs and the trail is somewhat obscured through low hanging trails. It would appear that this part of the trail doesn't get as much traffic. It could be because of the cut, its wet and dank, and there are still many ties in the middle of the trail. The picture below is looking back towards that intersection. 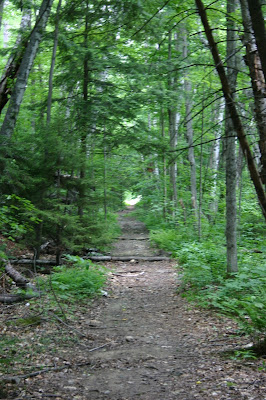 Do a 180 and now you are looking into beginning of the cut. It's an eerie feeling, like something is going to jump down on you from above. 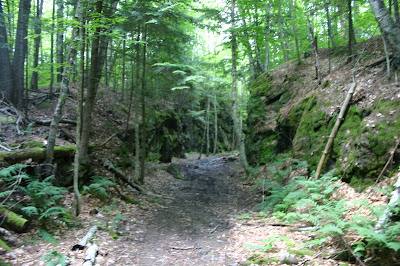 The deeper you travel in the cut, the danker and muddier it gets. 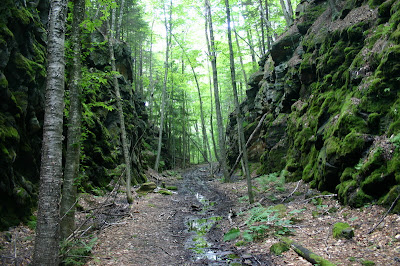 And here you can see where many of the ties are still present. 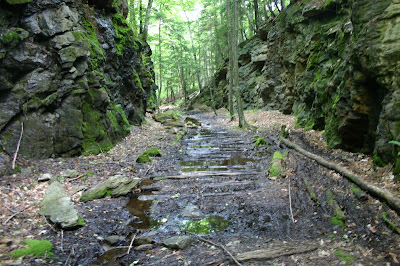 On the south side of the cut, there are few more exposed ties, even some sporting these. I found a few more after Wilder Brook, too. 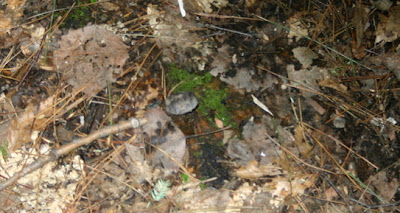 The trail makes a sudden right turn and the turn is clearly marked but from the map above you can see I went straight to see what was there. The bed moves out onto another earthen trestle and then just stops, which leads me to believe, back in the day, there was a wooden trestle crossing over Wilder Brook.

Backing tracking to the intersection more Catamount XC Ski signs appear on a nice, rocky, single track trail that intersects with yet another trail that leads down to Wilder Brook and a foot bridge that crosses the stream. 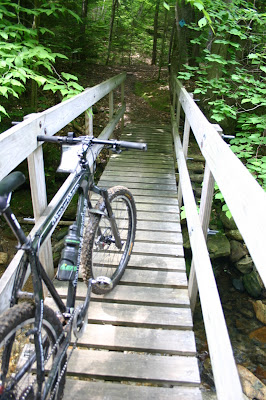 A beautiful little stream that I bet may hold a few little brookies here and there. 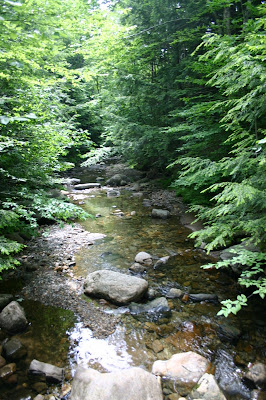 After climbing out of this stream valley the trail hits another intersection with trails going off in both directions. The one, in the direction of the lake, obviously is a dead end, but the other heading in the opposite direction may very well be part of the loop that climbs up the ridge and hooks back towards the dam.

Along the way, I discovered that my Garmin Edge305 cut out on me and I lost a mile's worth of data, still riding 19 miles in one day is the most that I have ever ridden. 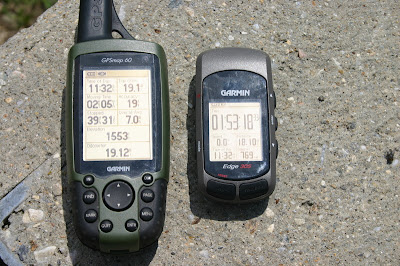 I took a little break at the Dam. Had a few snacks, took a few pictures, and changed my socks. 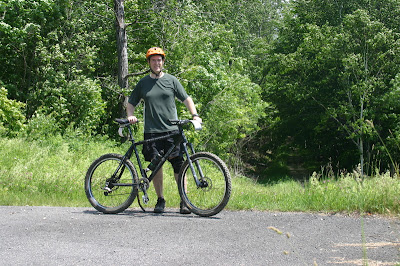 The Fixtation performed well, even with my kluge gearing that my local bike shop couldn't get quite right. Instead of using the nine speed cassette I got from a friend, the replaced it with an eight speed but could only get 7 of the 8 gears to cycle. What was worse, was to get into the lowest granny gear, it required a double shift - that was aggravating. The Atomblast wheelset was clearly overkill for this type of riding but that was all I had and probably should have been riding thinner tires - I remember that the next time I do another epic ride like this.

The way back was pretty smooth, except the Edge cutout again. I thought it might be due to the jarring of the ride so I put in my cell phone pouch on later to find that it cut out yet again. Also, about three quarters of the way, atop the earthen trestle I felt what I thought was a cramp coming on behind me knee, so I stopped to stretch and raise my seat. I found out later that it was more likely muscle strain. When I got back to Mountain Mills I called my wife to come pick me up. I actually called her from the dam and found out she was in Wilmington so that was pretty easy. I made it to the ferry landing had a couple hot dogs with lousy sauerkraut while I waited to get picked up. 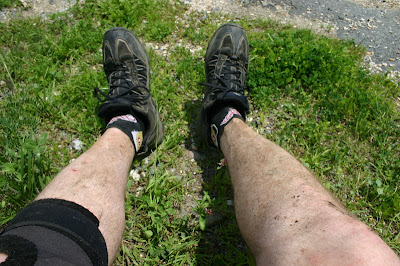