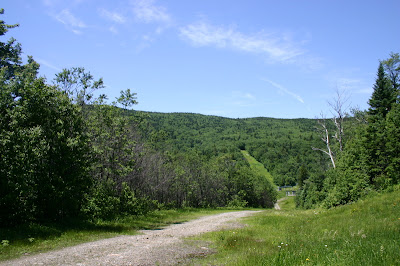 To start off my vacation at Mt Snow, I decided to ride on the mountain. Funny thing happened on the way down from the Condos. There is a ski trail that you can jump on to take to the base lodge and after 100 yards I noticed that my edge had cut out. It just powered itself down – kind of like when I endo’d at Trumbull and the bike landed on top of it. Only this time, there was no impact. It turned back on and it started recording again. Funny!

It took forever to find where you get a trail map and in addition to that you have to pay $10 bucks. Well, I went ahead and did it and set out. The guy at the shop recommended that if I were going to climb to the summit, that I should ride the #16 to the #15 to #4 trail and that will eventually turn into an access road for the summit.

I found the #16 but never found the #15 trail. In fact while riding down the #16 I passed right by the condo and wound up at the Carinthia basin for the ski area, but didn’t find the trail I was looking for. So I turned around and started climbing up the #16 trail. When it got really steep, I said there is no way I am pushing up that but I found a little feeder trail that had arrows pointing up, so I took it.

This trail was a bear! I think I rode half and hiked-my-bike the other half until I finally came across the #4 trail. Following the trail markers was really tough and it was nearly impossible to figure out which way the trail went at every intersection. I guess it was sheer dumb luck that I was able to figure out where to go. What they really need is to either blaze the trail or put up numbered signs so that you knew you were actually on a particular trail.

Bicycle Goodie Shop did a great job setting me up with gears on Thursday; however, the nine speed cassette was useless because the derailleur hanger on the Fixation isn’t long enough so Joe couldn’t get it to drop into the lowest gear. He suggested that we go with a 8 speed cassette, which I said do it and it worked, except for the lowest gear, so it turns out its now a 1x7. Still, it’s a step up from a single speed, however climbing is a different story.

With the single speed, I was used to running up to the base of the incline and then standing up and mashing until I couldn’t climb anymore. With gears, if you are in the granny gear, which I think is 32t, and my front ring is 32t, that is a 1:1 ratio and as soon as I came up off the saddle on anything really steep I would spin the tires. So, if I was going to ride in the granny, I had to ride like I was riding full suspension and scrunch up towards the center.

Getting back to my climb, there was a sign saying proceed no further due to sensitive habitat, so I veered off onto another trail that looked like it still climbed up until that too said it was in a sensitive habitat. Decided at that point to turn around and head back but by that time, I checked the Edge and found that I climbed over 1000’ 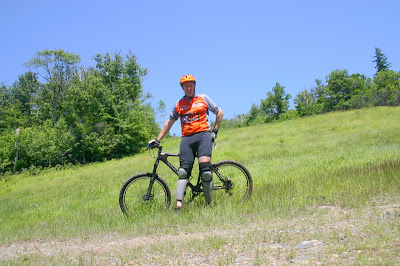 The way down was just as confusing as the ride up. Trails are not really marked well. Still it was fun to test my brakes for the trip down. They worked pretty well but they still needed alot of adjustments along the way, like making them tighter! Riding down one of the singletrack trails, I hit a mud hole and endo'd but jumped off at the last second with no injuries what so ever. 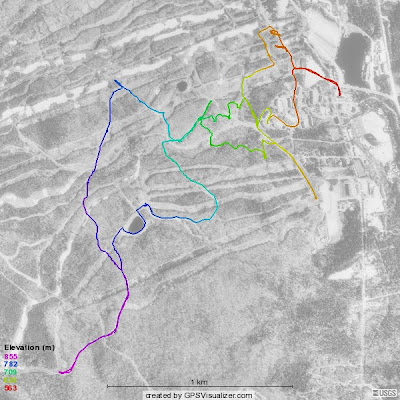