Fox on a leash!

Here is the track file of the Ride that Ed P. set up of for West Rocks State Park. We had seven riders, including Ed from Ed's magical mountain biking email distribution list. There was Ed, David, Kathy and her husband Dave, Heather, Jose, and myself. I was there on the Fixation 69er and the only single speeder in the group. Dave (Kathy's husband) was trying to ride single speed because Kathy (who works for Cannondale by the way) gave her husband a 1FG, single speed bike, so Dave thought he might trying riding is FS rig in one gear but gave up after a while.

It was great ride and I was able to keep up but there were times where riding single speed and rigid with a groups of fullies is just not the right mix. As a single speeder and riding rigid, your line (the route you pick for your bike to go down the trail) has to have a little thought behind it, otherwise you could flat because you don't have the suspension that enables the bike to float over the bumps. The 69er handles itself nicely in the technical terrain, but picking the right line is still paramount.

After this ride, it got me thinking as to whether or not I should go back to a full suspension bike for rides like this and others that I have been on lately. Before I do that, when the Fixation hits 100 miles as a 69er I am going to convert it to a regular hard tail with a manitou splice 130mm suspension fork and see how that rides, still single speed of course. I do have a new wheel set that I can go geary on, and I have all the parts, except I need new brake rotors. Once I get that, the fixation will become a normal mountain bike. 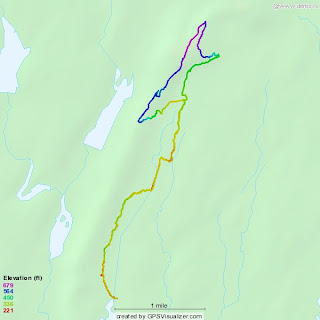 At least that is what the track looks like. Sorry there are no contour lines but it seems Terra Server is still on the fritz. 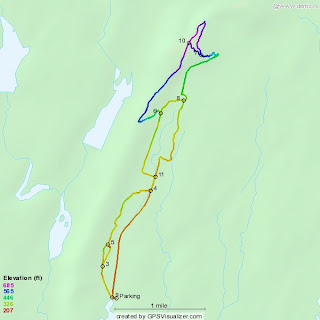