Rode Bennett's Pond today for lunch after my dentist appointment with Alex and we went on a tour! Found a great trail that climbs up into Wooster Mountain State Forest, which was probably an old farming road from 100 years ago. I was on the AC and that was smart because this kind of ride definitely called for some squish.

This trail, we are calling the White Dot because there were white dots marking it, eventually meets up with the Ives' Trail. What we should have done is instead of taking the Ives Trail, follow the little by pass through the wetlands (see the Orienteering map below) which I think met up with the more rideable section of the Ives' Trail at the Danbury Town line. 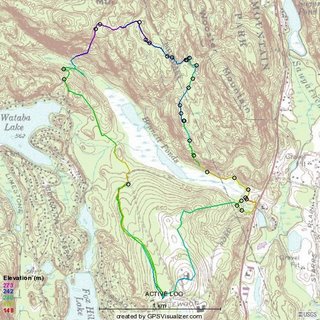 There were many trails coming off this trail, which I marked with waypoints (those little circles you see in the that require further exploring but based on what we have seen today, Bennett's Farm, could be the next Ninham! Of course, that is what I have been saying about Upper Paugussett.

Below is a Rick DeWitt's Orienteering map I found on the ROSA website which I have been looking at and did an overlay using the map above in Photoshop to show where we rode today. I found all the maps that I downloaded on the Ives Trail and what I indicated as heading north isn't the case, rather the trail snakes around that hill top where I have the "Ives Trail Intersection" and winds its way down to Route 7. Not sure how rideable that section might be. I would think that its more rideable coming up from the gun club. 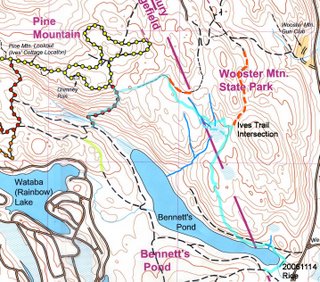 Last time Alex rode here he said that he found a trail coming off the red trail that does a fantastic climb up to Pine Mountain that gradually climbed up into the valley we discovered. Going to have to give that a try a next time around.

As you can see, from the past two rides that I have had at Bennetts Farm, there are quite alot of variety and I have yet to scratch the surface on Pine Mountain. 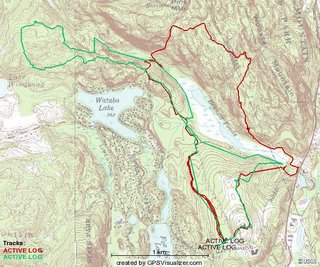