OTB and other discoveries

I have gotten into a patter now of alternating every other ride with my two bikes. Last Friday, at noon, I rode Upper Paugussett on the AC and I am finding that I really like riding it now despite the weight. It could be that the single speed is just building up my endurance so that riding the AC is now becoming easier because I now have the power the climb stuff that I was unable to in the past.

Friday, last, I was I took the white trail from the Polly Brody and instead of hanging a right and going up to Kissing Oak, I went straight, in search of the continuation of the logging road, for that matter the original road that traversed this property. Before the forest road, there was a much narrower road that accessed the property that was probably improved through the years until the State bought the land and created the current forest road. You can still see some remnants of this older road off of the forest road.

So, following this track in past the turn off, its gets lost about 100 yards in. Probably becasue of the fresh leaf fall. Need to wait till winter and try it again because the snow will compress things and I think the trail will open show itself better. Found a nice rock in this one area to roll. I picked up the road again after a little stream crossing and followed it till I couldn't follow it due to the overgrowth. Ended up bushwacking until I hit the Mulikin trail. I think if I come at from the other direction I will be able to define it better.

I did have one other success, though, I cleaned my up and over on the Mulikin for the first time. I just hit it at the right speed and rolled it nicely.

On Tuesday, Halloween, I rode Huntington with a guy from Danbury. We started the ride on Rock and Roll and about a quarter of the way into the trail (from the south) I endo'd for the first time on my 29er. Ouch! Both knees got it good and I got a nice bash to my left elbow. Chain popped off, too. Figures, the first time I decide to ride something really technical, I ride without protection and I get banged up.

The rest of the ride was great, though, despite the initial wounds. Took a trail that isn't on www.crankfire.com and found a connection to what Alan and I first thought might be Aunt Patty's Road but upon checking another map I found that it was the other side of Old Dodgingtown Road, I guess you could call it the Bethel section.

From there, we rode back up the hill to the trail intersection that I have come to on past rides and have always wondered if you went right, where would you end up. Of course coming up from the other section of Old Dodgingtown Road was a huge climb that I was able to do most of! Man, can I climb with a light bike. 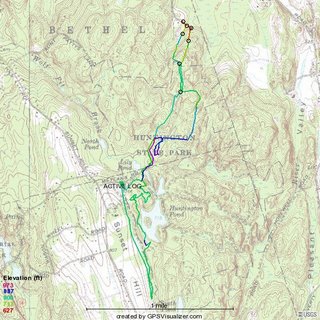 Just curious, did you ride while it was still light out?