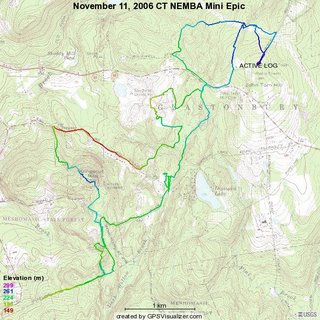 There was quite a crowd that showed up at the Birch Mountain Microwave Tower Parking Lot. Initially there must have been 30 to 40 riders, however, one group wasn't particularly jazzed about the 9 AM start time for the NEMBA ride, so they took off on their own. Most people were there on time, but there were a few stragglers that we knew were coming but got there late regardless. 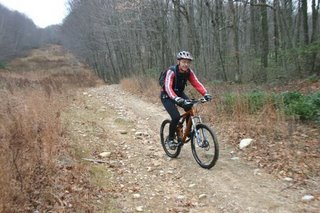 We were wheels in the dirt at 9:02 AM with Al Tinti leading the way. If you don't know Al, he is a hammer god and he was riding with broken rib from a couple of week ago! There were 19 riders in our group including four people on 29ers (myself included). We did a small loop through the bottom of Case, crossed over 94 and headed down into Meshomasic State Forest.

Around three miles in the ride, I had a little problem after I tried to do a little skinny ride and ended up failing miserably. I went down and when I got up I noticed my saddle was loose. The rail popped out of the end of the seat and there was no getting it back in. Luckily, we were 20 yards from Al's house and we went over to his place and replaced it with one the many saddles that he had as spares.
Since the main body of the group had taken off by the time we got back on the trail Al figured there was no way we had a chance of catching them, so we took some other trail that took us to a pipeline where we waiting for the main body. 45 minutes later they showed up.

One guy in the group had his seat post bolt sheer off and they did their best to zip tie it down so that atleast he could ride it out. From there we headed over to Konigscut Mtn and then back down again. Had to hit up a little road ride to get over to the next trail head which took us to some cool slickrock, then out to a farmer's field for a group picture. 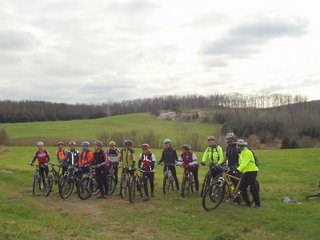 Made our way back to Rte 94 where we then rode in on an old farming road which brought us out to the Power lines, near where we started. 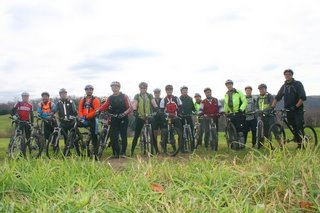 From there, the group splintered off in many directions. Some went into a case, others went for a quick loop into Gay City, and the rest headed back to the cars. Total miles for me was 13.65. I am thinking that the main body rode somewhere between 17 and 19 miles. We ended up at the restaurant with 9. Pizza and beer was picked up by CT NEMBA. We picked up two new members and the epic bug has hit a few in the group to plan some more rides like these next summer.