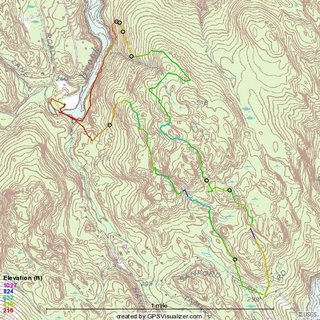 Out riding the Q Ball today in glorious weather with a guy that I met at the Massacre who lives right up the road from me and this guy can climb! Makes me wonder what I am doing wrong but I think it be more do to the fact that I started out wrong and Q Ball/SS is going to correct all that.

Ride was going great, started from Pond Brook, up the Fire Road (aka Polly Brody), did a little segment connector to the Horse Trail. Something needs to be done about the Horse trail, though because after the stream crossing (which needs armoring) you have that long steep climb. Need to find another way around it.

There are a few trees down in the canyon that need a solution. Maybe an up and over or two. I was hitting most of down trees with great success, though. Looped back on the MUT and I think I found a solution to the back bowl - that is once you leave the Echo Valley ROW/Farmer's Road (stonewall lined), climb up the hill and then head back into what I call the bowl, rather than climbing back up another hill rather steeply, stay to the west of the stream and then come up through a little draw.

Went down the Mulikin and it seems I can now put a face to a waffle print on the Mulikin! Almost cleaned the big up and over. I think a few more tries and I will be doing it. Also need to do some ribboning and water diversion at the start of the second downhill. Lots to do here.

At the stone wall turn we went North for the first time because I noticed the other day that it looks like there is a trail back there and there was. We made another up and over on a down tree that I cleaned. Unfortunately, there are two stream cuts that are pretty deep and need some actual bridging because the banks are so soft.

Once you get through the brambles it gets really flaky. Found some orange tape that looks like it ties in with an old logging track but not original forest road. Need to go in from the other direction and hack my back to see where it actually goes.

Never found the white blazed entrance that I marked with Snow Dawg, either. Could be because as I was coming down one particular ulta technical descent when the Q Ball slipped out from under me and I fell onto a nice rock. I think I bruised my ribs. So it looks like I won't be riding for at least a week, if not more! Ugh!
at 7:47 AM