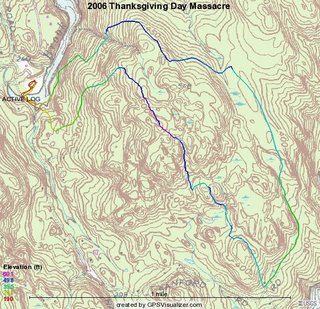 There is a group of guys that meets at Pond Brook on Thanksgiving Day morning to ride river trail at Upper Paugussett State Forest. I think I heard about this last year but it was snowing and decided to stay in where it was nice and toasty and warm. It was posted on Crankfire that meeting time was between 7 and 8. Got up at 7:00 and noticed that it was raining and a cool 41 degrees! Got suited up and got on the AC and headed down there. (Should have put my Goretex on).

Only people that were there were Tren (aka Blazer on Crankfire) and two of his buddies from Danbury. So, rather than stand around in the cold and rain, we took off. I lead them up from Pond Brook to the forest road, then up to one of the trails that stays on west side of the forest. Heard quite a few gun shots off in the distance. Finally hooked up with my NEMBA/NBLA trail and rode that back to Echo Valley.

Took the Forest Road back. Tren's buddies split off to take the river trail back (No Thanks) and meanwhile I led Tren over to the Mulikin. We hit it hard and fast. I tried to chicken out on the Up and Over but momentum carried me through. I think Tren wiped out in the muddy section. Stopped at the logging road and noticed that someone has opened the trail that hooks around back behind. I wonder if that is the White trail?

Ran down the rest of the Mulikin to the river trail and back to the lot. There must have been 20 or 30 cars in the lot and a bunch of people getting ready to ride. Had a Heiniken and chatted with a few guys. Met a guy that lives in the Tudor at the intersection of Hanover, Dinglebrook and Lake. Turns out he rides in the forest alot, too! Gonna have to get his number and start riding together!
at 12:06 PM